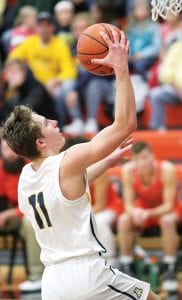 Elijah Zimmerman, left, and Andrew Hogrefe, above, drive the lane and keep their eyes on the basket for layups.– photos by Mary Huber

Ahead by only seven points at the half, Archbold turned it up in the third quarter on its way to a 74-59 Division III sectional boys basketball championship win over Liberty Center, Friday, March 1, at Elida.

“Liberty Center deserves a lot of credit. Those kids came to play tonight and they executed and shot the lights out,” said Joe Frank, AHS head coach.

“At times, I was wondering defensively if we were guarding real well, but you know what?

“Sometimes you just have to tip your hat to the other team and say, ‘Great job,’ and that’s exactly what I would say to the Liberty Center Tigers and coach Badenhop tonight.”

Leading 20-16 after one period, the Streaks led by as many as 10 points in the second before going into the locker room up 36-29.

“It looked to me like the team in black was playing with a little bit more urgency the first half,” said Frank.

“Some of the loose balls, some of the rebounds– not any one play, but just overall. 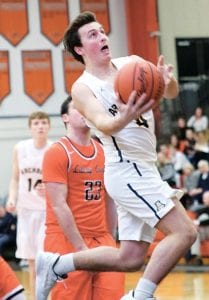 “We can be sharper than that.

“We’ve got another gear I thought that we didn’t use for a good share of that half.

“Then the third quarter I thought we came out and played with that urgency and (the lead) got into the double digits and kept it there for the second half.”

Austin Wiemken had a double-double with 12 points and 10 rebounds.

“I don’t know why it is this way, I’ve been watching for 34 years, it’s the same thing,” said Frank.

“When it gets to tournament, they (referees) put their whistles in their pockets.

We just have to be able to adjust to that and play through that contact.

“There was definitely some contact on those shots in there, but we’ve gotta play through that and find a way to finish those things off.

“We have to learn that we have to play with urgency for 32 minutes, because anything less than that from here on out is going to get us an ‘L’ and go home.

“There’s no guarantee it won’t be an ‘L,’ but we give ourselves a much better chance if we go out and play the game with some passion, energy and heart the way I know we can for 32.”

While the team kept its record perfect at 23-0, the win gave Frank his first sectional victory as head coach.

“It’s not about me,” he said. It’s about this team playing well and advancing.

“We were able to do that tonight, so I feel good about that.

“It’s gonna take some hard work these next three days in practice… to prepare ourselves. We want to give ourselves the best possible chance to go down to Lima Senior and put our best foot forward.”