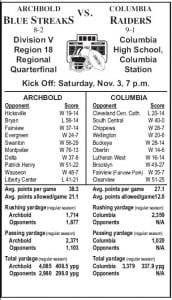 The Streaks are making their 11th appearance in postseason play, and return to the playoffs for the first time since 2010. They have a tournament record of 15-9, and won a state championship in 1988. They finished sixth in Region 18.

The Raiders are making their fourth appearance in the playoffs, and have a 0-3 record in postseason play.

Archbold averaged 38.3 points per game and allowed 21.1 ppg this season. The Streaks’ largest margin of victory was 63 points when they beat Montpelier 76-13, Friday, Sept. 28, for Homecoming.

Columbia averaged 27.1 ppg and allowed 12 ppg this year. The Raiders’ largest margin of victory was a 40-0 victory over South Central in their second game of the season.

Columbia jumped into the number three spot in Region 18 and the chance to host the quarterfinal with a 51- 24 victory over Clearview to end the regular season. The Streaks fell to the number six spot after falling to Liberty Center 41-21 in their regular-season finale.

Jay Banyasz (#8), the Raiders’ junior quarterback and a free safety, leads the Rangers in rushing. He ran for 577 yards this season on 103 carries for an average of 5.6 yards per carry. He also ran for eight touchdowns.

Tristen Rindfleisch (#45), a sophomore tailback/strong safety, ran for 264 yards on 51 carries for an average of 5.18 yards per carry.

Tyler Edmiston (#9), a junior wide receiver/outside linebacker, leads the receivers with 20 catches for 355 yards and three touchdowns. His longest catch was for 51 yards.

Ben Verbus (#85), a junior tight end/outside linebacker, had 10 catches for 156 yards and three touchdowns. His longest catch was for 20 yards.

Jesse Lambert (#2), a freshman wide receiver/defensive back, had 16 catches for 158 yards. His longest catch was for 30 yards.

Evan Wyse, the Blue Streak junior quarterback, leads the Streaks in rushing. He ran for 76 yards this season on 160 carries, for an average of 4.8 yards per carry. His longest carry was for 72 yards. He also ran for 14 touchdowns.

Dietrich leads the receiving corps with 45 catches for 658 yards and three touchdowns. He averages 14.6 yards per catch.

Lincoln Parsley, a junior, had 32 receptions for 633 yards and five TDs. His longest catch was for 65 yards, and he averages 19.8 yards per catch.

Levi Gerig leads the Blue Streak defense with 58 tackles. Tyson Lersch has 51, and Darin Sauder has 43.