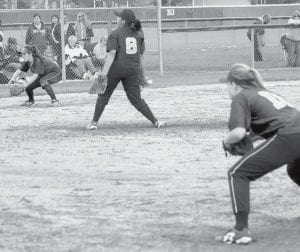 Above, Lex Campos winds up to pitch while Andrea Allan, at third base, and Abbey Graber, at first base, set up defensively. At right, Alyssa Schaub throws infield from right field. The photos were taken against Wauseon in the Streaks’ final NWOAL contest of the season. Archbold and Evergreen tied for the NWOAL championship with 7-1 records after the Streaks beat the Indians 8-5 and Evergreen defeated Liberty Center 6-0, Monday, May 12. It’s Archhbold’s third straight league championship; the Streaks won the NWOAL outright in 2007 and 2006. More details will appear in next week’s Archbold Buckeye.- photos by Scott Schultz

The May 5 and May 8 wins keep the Streaks’ hopes alive for a share of the Northwest Ohio Athletic League title. They are 14-6, 6-1 NWOAL.

The Blue Streaks were down to their last out in the seventh inning when a wild pitch allowed Lauren Kern to score and tie the game.

Alyssa Schaub then hit an inside the-park home run and the Streaks took a 5-4 lead into the bottom of the seventh.

The Patriots put the tying run on third base with two outs before two walks (one intentional) loaded the bases. Kern caught a pop fly to secure a hard-fought 5-4 win.

The Patriots struck first, scoring two runs in the second, thanks to two walks and a double.

Adi Lange drew Archbold to within one run with a run-batted in single in the third.

The Patriots stretched their lead to 4-1 on an overthrow to second base, which allowed two runs to score.

Archbold closed the gap to 4-2 on an RBI double by Stacy Wyse in the fourth, setting the stage for the seventh-inning rally.

Lange and Wyse each went 3/4 with a double to lead the Streaks at the plate. Kern pitched the complete game victory, giving up four runs on five hits while striking out nine and walking four.

“I am extremely proud of our young ladies for fighting to the last out,” said Joe Frank, AHS coach. “We didn’t push the panic button, and took advantage of the wild pitch to tie the game.

“Alyssa Schaub came through with the inside-the-park homer, and that was huge.

“It certainly wasn’t one of our better performances of the season, but we hung in there and came up with a huge NWOAL victory.”

The Streaks jumped out to a 12-2 lead after two innings and went on to an easy victory.

The keys to the game were the hot bats of the Streaks as they collected 21 hits. Andrea Allan led the way with four hits, while Dani Newman and Courtney Day each had three. Day was 3/3 with a single, double, triple, and 3 RBIs.

Kern was the winning pitcher. She gave up two runs on four hits while striking out four and walking two.

“This was one of those days when everything went right for us and very little went right for Delta,” said Frank. “They are a much better team than they showed today.

“At the same time, a lot of credit goes to our team for coming up to the plate and aggressively swinging at good pitches.

“This gives us the opportunity to play for a share of the title on Monday (May 12) against Wauseon, and that’s really all you can ask, is to have a chance with one league loss.”

Archbold, seeded second in the Division III sectional tournament at Archbold, plays the Tuesday, May 13, Delta-Tinora sectional semifinal winner in the sectional final, Thursday, May 15, 5 p.m.