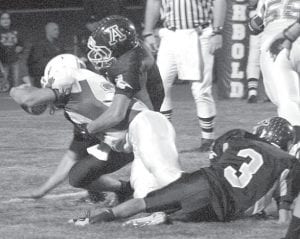 A Blue Streak defender tries to hold back a Delta Panther and keep him from crossing the goal line, Friday, Oct. 8. The score was tied at 14 at halftime, but AHS outscored Delta 14-3 in the second half for a 28-17 victory.–photo by Scott Schultz

On paper, the Archbold- Delta matchup may not have looked like much.

But that is why games are played.

On paper, nothing matters. What matters is what happens on the football field.

With the two teams battling to a 14-14 tie at the half, the Streaks kept their record intact and raised their Northwest Ohio Athletic League mark to 5-0 with a 28-17 Homecoming victory, Friday, Oct. 8.

The win sets up a showdown of the unbeatens, Friday, Oct. 15, when Archbold, ranked sixth in this week’s Division V football poll, travels to Patrick Henry.

“A Real Tough One”

“This was a real tough one,” said Bryan Miller, AHS head coach.

Taking the opening kickoff and starting on its own 27-yard line, it was typical Archbold offense. Morton connected with Anthony Reyes, Desmond Sleigh and TJ Gerken, pushing the ball deep into Delta territory.

Morton, who led AHS on the ground with 93 yards and three rushing touchdowns, crossed the goal line from 18 yards out for a 7-0 lead.

Delta’s Josh Beverly took Aaron Bontrager’s kickoff and returned it 27 yards, then ran 63 yards down to the Streaks’ 14-yard line.

Archbold answered with a 10-play drive, with Hayden Stamm on the receiving end of a 6-yard TD toss with 43 seconds left in the first quarter.

Delta’s next possession stalled at the Streaks’ 48-yard line, and Jeremy Schmitz dropped a punt on Archbold’s own 10-yard line.

Morton picked up 10 yards on the ground, but Beverly intercepted Morton on the next play.

Drew Salisbury knotted the score at 14 with a 1-yard run to close out the first half.

“We just didn’t make plays when we had to make them. We had Archbold in fourthand long a couple of times and we had opportunities, but credit Archbold. They made some big fourth-down conversions.”

The AHS defense picked it up in the second half, holding Delta to a 29-yard field goal midway through the third quarter and scoreless in the fourth.

“The defense did play a little better,” said Miller. “It was a short second half. We only had two possessions, and they had three.

“We got a nice stop on their first possession, but they still drove down for a field goal on their second, and drove it right down on their third before we stopped them on downs.

“We didn’t make a lot of adjustments at halftime. It was more just showing the guys what we were doing wrong in regards to alignment and missed assignments, and trying to get that fixed.”

Archbold’s first possession of the second half produced seven points. Morton picked up 3 yards on the ground, then connected with Danny Young for a 67-yard toss, moving AHS down to the Delta 4-yard line.

Morton put another six points on the board with a 4- yard run into the end zone, giving AHS a 21-17 lead after three.

With the defense shutting out Delta in the fourth, Morton added one more touchdown to seal the 28-17 win.

Beverly led all rushers with 111 yards on 13 carries.

“Obviously, it was critical for us to come out and play a better second half,” said Miller.

“Fortunately we were able to hold Delta to a field goal in the second half. They still moved the ball against us, but we did get a few stops.

“Delta was definitely taking it to us, but we had our chances, also, in both halves, and we didn’t do it. That has to get fixed.

“We only had the ball twice in the second half and were able to score both times, which was huge.

“We told the guys at halftime that this was what they should expect the rest of the year. We are going to be in close, tight games.

“We were tied at half with Bryan and came out with a win, so we’ve been here before. All three games left on the schedule will be battles.

“We will take them one week at a time, starting with Patrick Henry.”