Streaks Keep Pace In NWOAL With Victory Over Delta Panthers 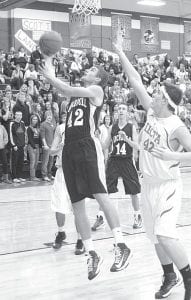 Devin Shannon (42) eyes the basket and drives the lane for a basket against Delta, Friday, Feb. 8. The Blue Streak senior finished with six points.– photo by Scott Schultz

The Streaks stand 14-3 overall. Bryan’s loss to Evergreen Friday night dropped the Golden Bears to 6-1 in the league, while AHS is in a three-way tie with Evergreen and Wauseon a halfgame back at 5-1.

With a furious first eight minutes, the contest had the makings of going down to the wire.

Both squads traded baskets throughout the first quarter, with Archbold leading 17-12 as the quarter came to a close.

Delta’s Scott Garlinger tallied the first bucket to start the second stanza, closing the gap to 17-14.

Archbold’s Devin Shannon and Jay Miller pushed the difference to 21-14 on backto back baskets.

Micah Mohr, who paced Delta with 10 points, nailed a ten-footer and followed with one at the foul line. Nick Jones added a jumper and the Panthers were knocking on the door trailing by two, 21-19.

From there it was all down hill for the Panthers. The Streaks went on a 10-0 run to close out the quarter.

Shannon scored again, and Miller came up with a steal. Leading the charge, Miller spotted Wyse for two. Garlinger fouled Wyse on the play, and was then hit with a technical foul.

After Wyse made his foul shot, Zeb Frank stepped to the line to shoot the technical.

Frank missed the first foul shot but made the second to close out the half with Archbold holding a commanding 31-19 lead.

Wyse and Price led Archbold in the scoring column with 15 and 11 points, respectively. As a team, the Streaks put nine players in the scorebook.

“Evan played a nice game at both ends of the court tonight,” said Doug Krauss, AHS head coach. “He was guarding the Mohr kid and did a good job on him; (Mohr) got a couple of looks, but not too many.

“Evan was aggressive going to the basket tonight, and that is awesome to see. That is what you have to do to make plays, and our guys are looking to do that.

“We ran the floor well. Taylor Price did a nice job tonight and hit a couple of big shots.

“Overall this was a really good win for us.”