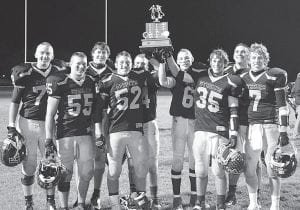 The Archbold football team successfully defended the Lions Club Trophy, Friday, Oct. 19, with a 48-7 drubbing of Wauseon at AHS.

It was the seventhstraight win for the Streaks, who improved to 8-1, 6-1 in the Northwest Ohio Athletic League.

Their only loss came at the hands of Bryan in week two. The Golden Bears claimed at least a share of the NWOAL title last week and can win it outright with a victory against Evergreen on Friday.

“Another wet night, but I guess we are getting used to it by now,” said Bryan Miller, AHS head coach.

“This was a good win. We just wanted to come out and play good football. We came out and got off to a good start; I am real happy and proud of the kids.”

The Indians, who have not defeated AHS in the last five meetings, looked to set the tone early.

They took the opening kickoff and marched down to the Archbold 13-yard line, but Ridge Schweinhagen lost the handle on the football. 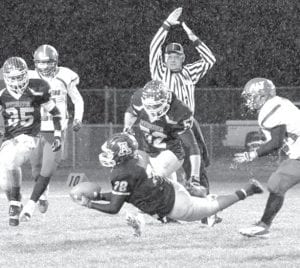 Travis Jaramillo (78) catches a tip for an interception in the second quarter against Wauseon.– photo by Mario Gomez

Archbold’s Levi Gerig recovered the loose ball, and from there it was all down hill for the visitors.

Taking the turnover, the Blue and Gold put together a five-play drive with Tyson Dietrich scoring from 10 yards out for a 7-0 lead.

The Indians went threeand out on their next possession, and then found themselves in a bigger hole after quarterback Evan Wyse scored on a 7-yard run for a 13-0 first-quarter lead.

“We were worried about their offense, and their quarterback, Ty Suntken, is outstanding, so that fumble recovery was big for us,” said Miller.

“We did play better defensively after Wauseon’s opening drive.”

E. Wyse led the Streaks, rushing for 170 yards on 12 carries and three rushing touchdowns. He added a 72- yard run in the second quarter and a 5-yard run in the third.

The junior signal caller also was 13-18 in passing for 192 yards and one touchdown, a 54-yard toss to Jay Miller in the second quarter.

Archbold built a 34-0 lead by halftime, and took the kickoff to start the second half.

It took the Blue and Gold just 13 seconds to score. Levi Wyse raced down the right side of the field for a 90-yard touchdown return and a 41-0 AHS lead.

“That was a great way to start the second half,” said Miller. “We will take those touchdowns any way we can get them.”

L. Wyse’s return tied him with TJ Gerken for third in AHS history. Gerken ran a 90-yarder back against Swanton in 2010.

Gerken holds the all-time AHS record with a 96-yard return in 2011 against Liberty Center.

In the history of AHS football, a kickoff has been run back for a TD only 18 times. Gerken did it three times in his career; so did Danny Young.

L. Wyse scored once more, on an 80-yard scamper midway through the third quarter.

As of Tuesday, Archbold was third in the Division V computer ratings in Region 18.

The top eight teams in each region qualify for the regional quarterfinals.