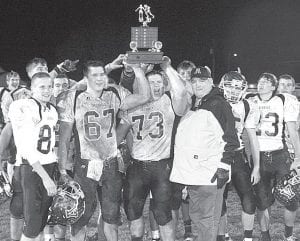 There’s never anything certain when two rivals meet. You can throw out the records, you can write all the clichés; but one thing you can’t do is really predict how a game will go.

Wauseon and Archbold renewed their longtime football rivalry, Friday, Oct. 23, when the Streaks made the short trip to Wauseon.

Mother Nature soaked Northwest Ohio all day Friday. Harmon Field was wet, slippery, and muddy. Just before kickoff, a stiff wind and sheets of rain were pouring onto the already-drenched field.

But by kickoff it was as if Mother Nature didn’t want to interfere with the game. A stiff wind still blew, but the rain had stopped.

The game went as one may expect, which meant you didn’t know what to expect. The Streaks (6-3, 5-2 NWOAL) used a late fourthquarter drive to upend the Indians 31-24, keeping the Lions Club Trophy in Archbold.

“We scored at the end when we needed to,” said Bryan Miller, AHS head coach.

Wauseon dropped to 5-4, 4-3 in the Northwest Ohio Athletic League.

A Tale Of Two Halves

Archbold took the opening kickoff. After marching 64 yards on 15 plays, AHS settled for an Aaron Bontrager field goal from 33 yards out.

The Indians didn’t fare so well in their opening series, fumbling on the first play. The Streaks recovered on the 25-yard line.

Two of the premiere kickers in Northwest Ohio were playing on the same field– Bontrager and Wauseon’s Clay Simpkins.

The Indians put three points on the board when Simpkins nailed a 31-yard field goal with 3:44 left in the first.

The quarter closed with the Streaks leading 10-3.

Wauseon was held to just 57 total yards on offense in the first half and mustered only those three points.

Morton scored on a twoyard run with 10:51 left in the second quarter.

After Noah Keefer blocked Simpkins’ punt, Morton connected with Drew Smith on a 12-yard touchdown toss with seven seconds left in the half. The Streaks were up 24-3.

“We told the kids at halftime there was no way this game was close to being over,” said Miller.

While the Streaks owned the first half, it was Wauseon who came back in the second.

The Indians scored the only points of the third quarter on a Landon Schaffner 21-yard pass to Michael Chapa, narrowing the gap to 24-10.

Wauseon’s ground game was heating up and its defense stiffened, shutting out AHS in the third.

Wauseon tallied two more scores in the fourth. Chapa scored on a five-yard run and Travis Reynolds scored on a seven-yard run, knotting the score at 24 with 3:42 left.

“When you are down 24- 3 and you battle back, that shows the character of our kids,” said Mark Emans, WHS head coach.

“We knew we would have trouble with the run,” said Miller. “I thought we had a pretty good scheme for the option. We knew one play that was going to hurt us– the off-tackle play. Every time they ran it they had a lot of success.”

Wauseon’s defense held AHS scoreless for 22 minutes and 46 seconds, but it couldn’t stop the Blue and Gold forever.

Morton led his team on an 83-yard touchdown drive that took 1:14.

First, a 29-yard pass to Smith; then a 17-yard completion to Jackson Gerken and a pass to Noah Keefer for 32 yards.

Morton scored from five yards out, and with Bontrager’s PAT the Blue and Gold led 31-24 with 2:28 left.

Wauseon still had one more chance, but the Streak defense played the bend-butdo not-break game.

Tyler Deeds raced off 19 yards on the kickoff return. Schaffner picked up five yards, and Jeff Jasso added two. Jasso raced for 27 yards on his next carry, taking the ball into the Streak side of the field at the 44.

Schaffner picked up eight and Reynolds added four. Jasso was thrown for a oneyard loss. With time ticking down, the Indians were forced to go to the air.

“We had the wind at our back in the fourth quarter, and that helped,” said Miller. “Noah (Keefer) made some big catches for us last week, and he made a huge catch for us on that scoring drive.”

“I thought those two turnovers we had gave Archbold 14 points in the first half,” said Emans. “Take them away and we are down 10-3 at the half; it’s a little easier.

“My hats off to coach Miller and his staff. That last drive they needed to make some plays, and they did.”