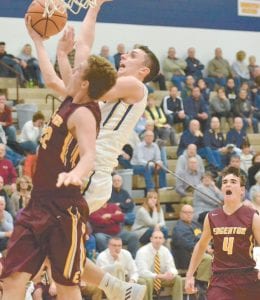 Austin Wiemken gets fouled by Edgerton’s Logan Showalter while driving to the basket, Thursday, Dec. 7 in their nonleague game. The junior led the Blue Streaks with 13 points against Holgate, Saturday, Dec. 16.– photo by Mario Gomez

Archbold prevented Holgate from scoring in double digits as the Streaks (3-1) thumped the Tigers (0-5) 61- 9, Saturday, Dec. 16, in a nonleague contest at Holgate.

The Tigers are coached by Brad Hurst, AHS ‘05, who played under Doug Krauss, AHS head coach.

Archbold jumped out to a 5-0 lead with Austin Wiemken scoring four of the five points on a pair of layups.

Holgate stopped the run with a bucket, but the Streaks then went on an 8-0 run to take a 13-2 lead.

Cole Snyder scored on a layup for the Tigers, but Archbold scored the final seven points of the period to lead 20-4.

Archbold started the second quarter with a 13-0 run before Holgate scored a basket at the end of the half to avoid being shut out in the period, trailing 33-6.

The Streaks opened the second half with a 14-0 run.

Holgate’s Cody Sonnenberg drained a three-pointer with a minute left in the third, and Cash Gericke hit a pair of free throws to give AHS a 49-9 lead going into the final eight minutes.

Archbold added 12 points in the fourth to close out the game.

Wiemken led all scorers with 13 points. Eli Miller and Rigo Ramos each chipped in 11.