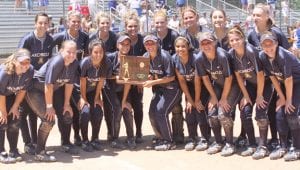 The Streaks hold the D-III Regional Championship trophy. More photos may be viewed and/or purchased by clicking on the Big Blue Button at the top of the home page.–photo by Mary Huber

Alyssa Schaub, leadoff hitter for Archbold, hit a home run to open the bottom of the first inning in the Division III regional softball final between the Streaks and Elmwood (20-10), Saturday, May 29 at Ashland.

A Sarah Wyse double to right field scored Schaub in the bottom of the third for a 2-0 lead.

The Streaks extended the lead to 4-0 in the fifth when a wild pitch allowed Courtney Day to score and Morgan Cody hit a single to center field, which scored Mindy Rupp.

The Royals climbed back in the sixth, scoring two runs with two outs to close the gap to 4-2.

But Archbold widened the gap back to three runs in the bottom of the inning when a Jenna Nofziger single to center field scored Abbey Graber.

Elmwood left two runners on base in the seventh when Vanessa Schwind hit a grounder to Schaub, who tagged out the runner at third for the third out, giving Archbold a 5-2 regional final victory.

Archbold (26-4) plays West Liberty Salem (26-3) in a state semifinal, Friday, June 4, 5:30 p.m. at Firestone Stadium in Akron. Salem was ranked fourth in D-III by the Associated Press, and won its regional final at Fairborn 2-0 over Sparta Highland.