Streaks Improve To 20-2 With Five Wins 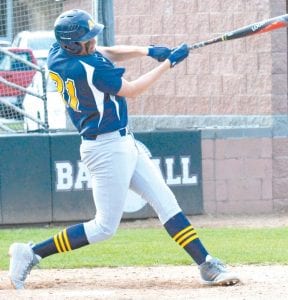 The Streaks won their second NWOAL title in three years, finishing with 7-0 league records in 2019 and 2017.

It is their 17th NWOAL title in school history.

Rigo Ramos pitched a fourhit shutout for six innings, striking out 11 and walking one as the Streaks defeated Liberty Center (10-8, 4-3 NWOAL) 8-0, Monday, May 6, in NWOAL action.

“I’m really proud of these guys for staying focused and working hard through all the rain cancellations to come out and capture the league championship in convincing style,” said Dick Selgo, AHS head coach.

“The NWOAL is a very hard league to win, so I couldn’t be happier for our guys.”

The Streaks collected 12 hits. Cory Erbskorn had two doubles plus a base hit to lead AHS. Jeron Williams and Kade Kern each had two singles. Holden Galvan, Mitch Grosjean, Travis Ziegler, Kreighton Sims, and DJ Newman each had a single.

Archbold scored two unanswered runs in the seventh inning to turn a 3-2 deficit into a 4-3 non-league win at Defiance (15-7), Tuesday, May 7.

Jeron Williams recorded the win in relief. In 1 2/3 innings he allowed no runs on three hits, struck out three, and walked one.

The Streaks had seven hits. Erbskorn had a double; Williams had two singles. Galvan, Ziegler, TJ Rice, and Ramos each had a base hit.

Ethan Hagans threw a three-hit shutout for five innings as the Streaks beat the Panthers (2-19, 0-7 NWOAL) 10-0 in six innings, Wednesday, May 8, at Delta.

Rice kept the shutout intact by striking out two of three batters in the sixth.

Newman broke a scoreless tie in the fifth with a twoout, two-run double to get the Streaks going.

AHS had 12 hits. Newman had a double and a single with two runs batted in. Ziegler, Drake Mohring, and Galvan each had two singles, with Ziegler and Mohring recording two RBIs and Galvan, one.

Clay Nafziger had a double with an RBI.

Williams came on in the 10th inning to get the save in front of a large crowd.

Rice had the game-winning hit in the top of the 10th as he drove in Grosjean.

Rice recorded the win. In 1 2/3 innings he allowed no runs on no hits, struck out two, and walked two.

The score was tied at 2 going into the sixth inning, when AHS erupted for seven runs over the last two innings. Ramos drove in the winning run in the sixth.

The Streaks had 11 hits, led by Ramos with a pair of base hits and three RBIs; Grosjean, double, single; and Kern, double, two RBIs.

The winner advances to a district semifinal, Thursday, May 23, 6 pm, at Defiance.