Streaks Hang On For Three-Point Win 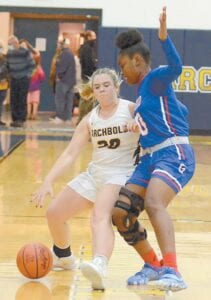 After jumping out to a 12- 4 lead after the first quarter, the Archbold girls basketball team hung on for a 36- 33 season-opening victory in the Thunderdome, Saturday, Nov. 21.

The Blue Devils outscored the Streaks 17-6 in the second quarter to take a 21-18 advantage into the locker room.

Archbold led by one, 27-26, going into the final quarter, and outscored Springfield 9- 7 for the three-point victory.

Addi Ziegler led all scorers with 12 points. Harley Phillips was also in double figures, with 10.

Kendall Carruthers and Kimora Carruthers each scored 11 for Springfield.

The Blue Devils won the rebounding battle 29-22. Kylie Sauder and Addison Moyer each grabbed six for the Streaks.

“I thought we did a nice job handling their pressure all night, and they brought it all night.

“I liked the way we competed. We didn’t shoot well, but Addison Moyer hit two big free throws to extend the lead to three and seal the win.”