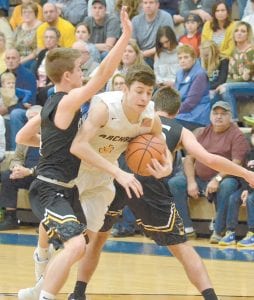 Archbold’s Jeron Williams gets fouled as he tries to split a pair of Blackbirds.– photo by Mario Gomez

The Thunderdome at Archbold High School was the site for the intra-county boys basketball rivalry between Archbold and Pettisville, Friday, Dec. 22.

Coming into the contest, the Blackbirds sported a 6- 0 record while the Streaks were 3-1.

A big second period helped Archbold pull away, but the Birds would not go quietly, as they cut a 17-point lead to six before suffering their first defeat of the season, 62-52.

Austin Wiemken got off to a fast start, scoring seven points to push Archbold to a 9-3 lead.

Pettisville scored the next seven points for a 10-9 lead with 3:34 left in the first period.

A Rigo Ramos threepointer was answered by a Graeme Jacoby layup for a tie at 12.

After Kaiden Bedsole hit a three for the Streaks, Pettisville scored the next five points to lead 17-15. Two free throws from Bryce Williams and Ramos tied the score at 17 after one.

Archbold started the second period with an 8-0 run, forcing PHS to call a timeout. 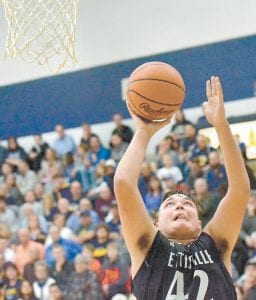 Pettisville’s Graeme Jacoby gets off a shot beneath the basket at the Thunderdome.– photo by Mario Gomez

Landon Roth stopped Archbold’s run with a jumper, but the Streaks again went on an 8-0 run for a 33-19 lead.

“I thought our start was great,” said Brian Leppelmeier, PHS head coach. “(It was) a great first quarter played by both teams. We just dug ourselves a hole in that second quarter.

“There’s just too many times that we had some offensive possessions that were just not very good.”

Pettisville slowly started its comeback in the third, scoring on a Detric Yoder three and a Jacoby bucket to trail 38-26.

Bedsole pushed the lead back to 15 with a three.

Pettisville went on an 11- 5 run, finishing the quarter with a Canidate Vickery steal and layup to pull within nine, 46-37.

Archbold’s Jeron Williams started the final eight minutes with a layup to push the lead back to double digits.

Sam Rychener and King scored inside for PHS to pull within seven, 48-41, but B. Williams’ layup pushed the difference back to nine, 50- 41.

On Pettisville’s ensuing possession, Vickery was intentionally fouled and went to the line for a pair of free throws.

He hit one, and the Blackbirds retained possession after missing the second. Jacoby powered his way inside for a basket to pull within six, 50-44.

It was the closest the Birds would get. Archbold outscored Pettisville 12-8 over the final four minutes thanks to some timely free throws for the 62-52 win.

“That was a really good game for us to have,” said Doug Krauss, AHS head coach. “Tip your hat to the Pettisville kids. They did a great job.

“Our kids were hardpressed, and we had to battle through some situations ourselves.”

“We said coming in that this was gonna be a great test for us,” said Leppelmeier, “and I think we’re gonna learn from it.”

B. Williams led all scorers with 16 points.

Yoder and Jacoby each scored 15 points to lead the Birds. King chipped in 10.

The Streaks won the rebounding battle, 26-24, while the Birds committed 18 turnovers to Archbold’s eight.