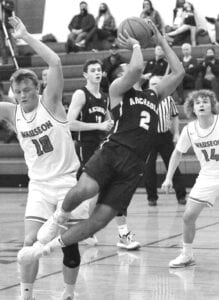 Above: Archbold’s Noah Gomez (2) drives the length of the court and scores after deflecting a Wauseon pass on the other end in the first quarter. Right: Archbold’s Ashton Kammeyer and Wauseon’s Isaac Wilson reach for the ball as the game tips off. The Streaks outscored the Indians 21-8 in the fourth quarter on their way to a 52-37 victory and the NWOAL title with a perfect 7-0 record.– photos by Mario Gomez

In the Thunderdome on Thursday, Dec. 17, Archbold dropped its non-league boys basketball contest with Wauseon by a score of 40-34.

In the nine weeks leading up to their rematch, it was not revenge on the mind of the Streaks.

The Streaks traveled to Wauseon, Friday, Feb. 19, with the Northwest Ohio Athletic League title on the line.

They achieved redemption with a 52-37 victory, winning their 29th NWOAL championship in school history and finishing undefeated in the league at 7-0, 18-4 overall.

“Obviously Archbold is one of the top programs, if not the top program, in the area every year, and they are the measuring stick,” said Chad Burt, WHS head coach, who finished 17-4, 6-1 NWOAL.

“They made plays tonight. We can’t have more respect for them than we have.”

“It was our night,” said Joe Frank, AHS head coach. “Our kids played without fear. We had our pedal to the metal all night long.

“Even in the end when they were trapping us (at) half-court, we attacked it and looked to score out of that instead of just trying to pass it and get fouled.

“Every guy who set foot on the floor did something to help us, and the guys on the bench helped prepare these guys for tonight with a good look for the scout team this week.

“It’s really meaningful to win a league title in the NWOAL because of the quality of the teams you see yearin and year-out.”

Classic Back And Forth Affair

For the limited fans in attendance, early on the game played out much like expected.

The teams went nearly shot-for-shot early, but a DJ Newman layup gave the Streaks an 8-6 lead with 3:14 left in the first quarter.

His brother Austin was in the right place for the offensive rebound and put-back for a 14-9 lead after one.

Connar Penrod scored four of Wauseon’s first six points in the second to give the In- dians a 15-14 advantage.

After Archbold went on an 8-1 run, Wauseon scored the final five points of the quarter and the Streaks led 22- 21 at the break.

“It felt like we were behind the eight ball all night,” said Burt. “I’m not sure we got a lead the rest of the night, yet (Archbold) couldn’t stretch it to more than two or three.

“They made huge plays down the stretch.”

Tyson Britsch scored the first basket of the second half to give Wauseon its last lead of the night, 23-22.

Newman, who had 11 points in the first half, scored eight of Archbold’s nine third-quarter points for a 31-29 lead heading into the fourth.

“I tell ya, he (Newman) was special tonight,” said Frank. “He didn’t miss too many shots. He was big time.”

“I thought DJ made plays all night long,” said Burt. “I thought he did a great job of getting to the paint and making plays.

“We didn’t have an answer for him defensively.”

After exchanging baskets, Wauseon tied the game at 33 with 6:53 left.

A 6-0 run put Archbold up 39-33, forcing an Indian time-out and changing the complexion of the game.

Isaac Wilson scored to stop Archbold’s run, but Alex Roth buried a three-pointer to push the difference to seven, 42-35.

Colton DeGroff scored a layup with 3:26 to play, which turned out to be the Indians’ final points of the game.

Alex Roth and Ashton Kammeyer scored the final 10 points of the game to secure the win and bring the NWOAL title back to Blue Streak country.

“I give Wauseon a lot of credit,” said Frank. “They came into this game undefeated (in the league) and won a lot of big games to get here.”

“I told our guys in the locker room… I think they beat us,” said Burt.

“I don’t think we lost the game. I think they beat us. They made a lot of winning plays down the stretch both defensively and offensively.”

Newman led all scorers with 21 points.