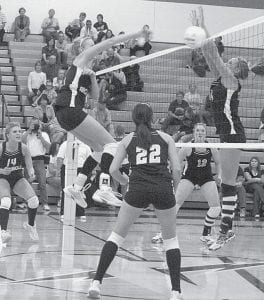 Emily Snyder’s spike touches the top of the net while Liberty Center’s Kaitlann Hogrefe attempts a block. Snyder had nine kills and was 22/28 in attacks against the Tigers in their sectional final.- photo by Scott Schultz

Archbold won the first game, but then Kaitlyn Rohrs and the Liberty Center Tigers took over, winning the next three to capture a Division III sectional title at AHS, Saturday, Oct. 18.

Archbold, the number two seed, ended the season with a 15-9 record. The Streaks had advanced to the sectional final with a 25-5, 25-13, 25-18 victory over Montpelier in a sectional semifinal, Wednesday, Oct. 15.

“I thought they knew what we were going to try and accomplish, and where our weaknesses were. They did a great job of exploiting those weaknesses and when you have Rohrs on…”

Kaitlyn Rohrs, senior outside hitter for the Tigers, unofficially had 23 kills, including 10 in the third game.

“We didn’t do quite what we had worked on and didn’t execute our game plan quite as well as they did,” said Nofziger.

“They played a nice match. Their defense was better than any other defense that we’ve seen out of the league this year.”

The first game stayed tight throughout. A kill by Melinda Sauder gave AHS a 20-19 lead, which was extended to 21-19 when Sauder and Devin Newman had a double block at the net.

After a Tiger time-out, the Sauder-Newman duo repeated the double block, giving the Streaks a 22-19 advantage.

The Tigers were called for a net violation, giving the Streaks a four-point advantage, 23- 19. The serve went back to LC when an Archbold spike went into the net, and a kill by Rohrs closed the gap to 23-21.

Sauder got the serve back for AHS with a kill, and the Streaks were at game point, 24- 21. After another LC time-out, Newman and Hailey Galvan double-blocked Rohrs for the 25-21 first-game victory.

The Tigers turned the tables on the Streaks starting in game two, as the momentum swung to their side. Liberty Center had the serve with a 24-20 lead, but Hope Fitzsimmons’ serve was out, giving the serve back to AHS with the Tigers at game point.

An Emily Snyder kill closed the gap to 24-22, and the Tigers were called for a net violation, closing the Streaks to within one, 23-24.

A Rohrs kill finished the second game off for the Tigers after an LC time-out.

LC took control in the fourth game, building an 18-10 lead. The game and match ended with Rohrs’ final kill of the night, ending the Blue Streaks’ season.

AHS jumped out to a 19-3 lead in the first game and never looked back on its way to a three-game sectional semifinal victory .

Snyder had 10 kills while Galvan had seven for AHS.

Looking Back At The Season

“They’ll all be missed,” said Nofziger.

“With Melinda, we have to work on another left side to take care of. She did a great job this year, getting very little playing time last year and coming in and working hard to make herself better.

“As a defensive specialist, we looked to (Deena) to read and do a lot of different things. She did what we asked her to do.”

A setter, “Lauren Kern was a three-year starter, so her experience will definitely be hard to replace. That’ll be the tough one to really take a look at as to who you’re going to put in there, because she’s like the quarterback. They run the game on the court, and she knows the game very well.

“It’s gonna be tough to replace those guys, but we’ve got a strong group of juniors coming back, so we’ll look to improve on things next year.

“That’s what you keep looking for.”