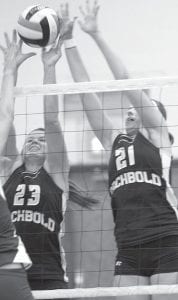 Sarah Wyse (23) and Nicole Hurst (21) partially block the spike of Patrick Henry’s Megan Michaelis in their NWOAL match, Tuesday, Oct. 12, at PHHS. The Patriots won the match in three games.–photo by M a ry Huber

In game one, PH led 4-2 when Emily Nagel stepped up to serve for the host. By the time Archbold finally got a side out, the Patriots were up 11-3.

PH won the first game on a Tori Meyer kill.

Archbold got its footing in the second game, staying close but leading only once, at 4-3.

Sarah Wyse’s serve tied the game at 19 when PH’s serve receive went into the rafters, and the score was tied again at 20 with a kill by Becca Gerig.

The Streaks led 12-10 in the third game when the Patriots scored four straight points for a 14-12 advantage. After an Archbold time-out, Jenny Lehman’s kill closed the Streaks to within one, 14-13.

That was the closest Archbold got. PH scored five straight points for a 19-13 lead before a long serve gave the side out back to AHS.

Archbold’s final two points came on a block by Nicole Hurst and Alyssa Gobrogge and a Hurst spike that was only partially blocked. A net violation by AHS at match point gave the game and match to PH.

Gerig led the Streaks with nine kills. Hurst had six; Abby Short and Lehman each had five.