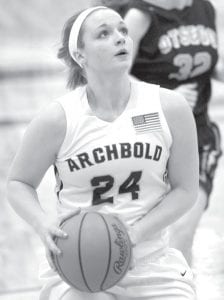 Cassi Wyse looks to complete a fast break with a layup against Otsego, Thursday, Feb. 25.– photo by Mary Huber

Down 20-7 after one quarter, Archbold was unable to come back as the Streaks lost to Otsego 44-35 in a Division III girls basketball district semifinal, Thursday, Feb. 25, at Lake High School.

“Tonight was a disappointing end to the season,” said Brian Ziegler, AHS head coach. “We picked a bad time to have a poor shooting night.

“Otsego made the plays to move on. One of our concerns was Morgan Smoyer inside, and we didn’t defend her well enough to keep her off the boards.

“We had to spend a lot of energy playing catch-up, and when we got the game to four points, we ran out of gas.

“It wasn’t the outcome we were looking for, but we still had a good year.”

Archbold’s Kierstyn Repp started the game by hitting a three-pointer with only 32 seconds gone.

Smoyer answered with a deuce, followed by a three from Kim Forshey.

Andi Peterson tied the score at 5 with 6:22 left in the period.

Kierstyn Repp pushes the ball up the floor. She led AHS with 15 points.– photo by Mary Huber

Then the Knights went on a 15-2 run that gave them a 13-point lead going into the second period.

Archbold’s final two points in the first were on a pair of free throws from Morgan Miller with 51.7 seconds left.

Scoring slowed down in the second, and Otsego took a 22-13 lead into the locker room.

Repp started the second half just like the first, with a three-pointer at the 7:30 mark.

Smoyer then went on a roll, scoring a deuce, two foul shots, and another bucket before Peterson hit a basket with 3:25 remaining and Otsego up 38-30.

Otsego hit 6-8 at the foul line the rest of the way, while Shelby Cline hit a three with 36 seconds left and a deuce with nine seconds left for the 44-35 final.

Smoyer led all scorers, with 23 points. Forshey was also in double figures, with 11.

“We have four seniors leaving– Brooke Hines, Cassi Wyse, Neila Kinsman, and Shelby Cline– that we’ll need to replace, but we have a good group returning to build around,” said Ziegler.

In the district final, Evergreen’s Kaela Fauble scored on a put-back with two seconds left to defeat Otsego (20-6) 31-30, Saturday, Feb. 27, and win its first district title in school history.

The Vikings (24-2, ranked sixth in Div. III by the Associated Press) were scheduled to play Columbus Grove, last night, Tuesday, at Ohio Northern University, in a regional semifinal.

Willard played Columbus Africentric in the other regional semifinal, last night, at Lexington.