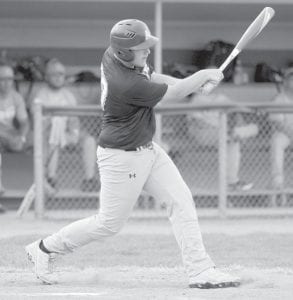 Jeff Sparks’ single to left field brings home Ben Bucklew from first base for Archbold’s only score in a 5-1 nine-inning loss to Lima Bath, Saturday, July 12, in the state ACME tournament at Archbold.– photo by Mary Huber

Down 1-0 with two outs in the top of the seventh inning, Lima Bath (18-6) came back to defeat Archbold 5-1 in nine innings, Saturday, July 12, in the state ACME tournament at Archbold.

Archbold scored its only run of the game in the bottom of the first inning.

Lima Bath’s Luke Niebel got on base with a base hit, then stole second. Jared Davis scored Niebel with a single to left field to tie the score at 1.

Everything went wrong for the Streaks in the seventh inning.

Bath’s Dylan Burkholder was hit by a pitch, sending him to first base. A sacrifice bunt by Andrew Renner sent Burkholder to second.

After Chase Clark hit a triple to right field, which scored Burkholder for a 2-1 Bath lead, Bucklew, Archbold starting pitcher, was replaced by Matt Sevey on the mound.

Derek Walker fields a grounder and fires the ball to first base for an out against Lima Bath.– photo by Mary Huber

Chase Clark scored from third on a wild pitch, and Sevey walked Niebel and Tyler Stahr.

Davis hit a line drive to right field, bringing home Niebel and Stahr for a 5-1 advantage.

Archbold was unable to get anyone on base in the bottom of the inning for the Lima Bath win.

Cam Clark got the win. Pitching a complete game, he allowed one run on five hits, struck out six, and walked three.

Sparks led Archbold at the plate with a double and a single. Sevey, Hayden Galvan, and Isaac Petersen each recorded singles.

Northmont (25-7) was up 6-1 going into the fourth inning. Archbold scored nine runs in the fourth and fifth to take a 10-6 lead.

The Streaks (11-9) scored their final run in the top of the seventh, while Northmont scored three times for the 11-9 final. 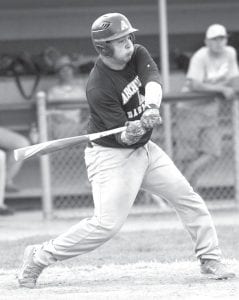 Hayden Galvan gets a base hit in the fourth inning against Lima Bath.– photo by Mary Huber

Sevey was the winning pitcher. In five innings he allowed three runs on five hits, struck out none, and walked three.

Others getting singles were Sevey, Walker (2), Sparks, Galvan, Mitchell Hogrefe (2), Seth Mayer, and I. Petersen (2).