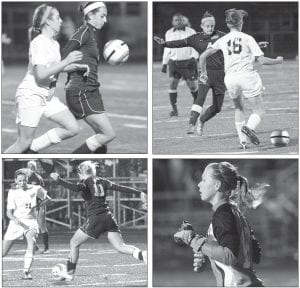 Clockwise from upper left: Mindy Rupp holds off a Gator and controls the ball; Sierra Nofziger (4) tries to steal the ball from Emma Evans (16); goalkeeper Nichole Wood keeps an eye out for a shot; Carley Wyse (10) dribbles toward Michelle Delaney. The four seniors played in their final game as Blue Streaks.– photos by Mary Huber

“I don’t think we’ve ever played in wind like that before.

“The (football) uprights bending the way they did last night– I’ve never seen that before.”

The one goal was enough to send Laurel (15-5-1) to the state championship game, Saturday, Nov. 12, against Cincinnati Summit Country Day.

Country Day defeated the Gators 5-2 to win the state title.

The wind on Wednesday night had “an effect on both teams. It wasn’t just us,” said Kidder.

“I feel like we definitely controlled the ball more, and we had more shots on goal, but they just didn’t find the back of the net last night.

“The goal that (Laurel) got…the wind caught it and we couldn’t get to it.

“Our girls played hard. They fought, they did their best, and like always, they carried themselves with class and dignity.

“We really felt great coming out of that first half with only one goal having been scored on us in that wind.

“We really thought that we would be able to come back, knowing that we had the wind in the second half, which we did. I don’t think the ball got down to the other end but maybe twice in that half.

“But we just could not find the back of the net. Their goalie was outstanding.

“She was a very good goalie, and their defense was strong as well.”

“We couldn’t have asked for a better group of girls,” said Kidder. “They just represented themselves and their school, their community, and their families really well.

“They worked their butts off.

“We’ve had Sierra, Mindy, and Carley since they were freshmen, and we had Sierra and Mindy before that as managers for a couple years, so they’ve been with us for six years.”

Wyse impressed Kidder with her “enthusiasm all the time, no matter what the situation. She was just bubbly and willing to work her butt off in every single situation.

“Mindy’s kind of quiet, but she gets out on the field and she works her butt off.

“She works so hard and she came so far from day one playing soccer to finishing out her senior year last night. She turned into a tremendous player.

“Sierra had a rough couple of years with injuries and concussions. To fight through all of that and to turn into the player that she did… she stepped up.

“All of them made huge improvements and improved tremendously as players. It’s just everything you’d want as a coach and everything you hope for, for all your players after four years of play.

“We went to (Nichole) last year before the season started and asked her if she was willing to give it a shot in the goal. That first day she hesitated a little bit and she thought ‘Yeah, I’m gonna do it. I’m gonna work,’ and the work ethic on her was amazing.

After Wood played volleyball her freshman year, she switched to soccer in her sophomore year.

“She got hurt last year, and missed the majority of the season,” said Kidder. “She fought hard in rehab to get better.

It was the first time the team had made it past the district semifinals.

Thinking about the season, “I don’t know how you could say (it was) anything less than great,” said Kidder. “It was an amazing season.

“These girls made history for Archbold soccer.

“It was amazing getting the first league title. That was a huge accomplishment for them.

“We couldn’t have asked for a better season. Yeah, it would’ve been great to make it to the next game, but we’re still proud of what they did. So proud.

“Proud of their play, but more than anything, proud of the people that they are, the character that they have, and the way they carry themselves on and off the field.

“We couldn’t ask for a better group of girls.

“It was an honor to coach them.”