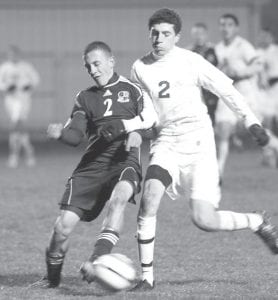 Left: Blue Streak junior Jacob Ott uses his body to prevent Nick Hauck of Ottawa Hills (in white) from getting to the ball first. Right: Alex Hurst, a senior, dribbles the ball down the field.– photos by Mary Huber

Ottawa Hills came from behind to knock off Archbold 2-1 in a Division III regional boys soccer semifinal at Graham Memorial Stadium in Findlay, Wednesday, Oct. 31.

The Streaks, who were undefeated, finished the season with a 19-1 record.

Chilly and rainy conditions initially hindered the offensive attacks for both teams.

But Archbold got on track in the 23rd minute when senior midfielder Shae Hernandez was fouled 30 yards from the goal.

Junior midfielder Brodie Nofziger took the resulting free kick from the spot of the foul, firing a powerful shot to the upper left corner of the goal well beyond the reach of All-Ohio goalie Michael Geiger.

Nofziger’s goal, his 33rd and final of the season, established the AHS singleseason scoring record. 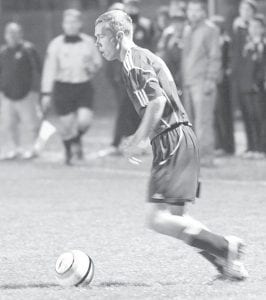 The Streaks maintained the lead until three minutes before the half, when an Archbold infraction led to an Ottawa Hills free kick 40 yards from the goal.

Sam Brochin launched a high shot into the rain that slipped off the hands of AHS goalie Emerson Radabaugh for the score.

After the break, Ottawa Hills created several scoring chances but were thwarted by the Archbold defensive corps.

With 11 minutes to play, Blake Pappas slipped past the Archbold defense with only Radabaugh left to beat. The goalie charged out and deflected the ball just inside the 18-yard penalty area.

But Pappas fell in the process and a tripping foul was called, resulting in a penalty kick.

Brochin successfully converted the PK for his second goal of the night, the ultimate game-winner.

Robert Gabriel, III, OH first-year coach, said, “Give credit to Archbold. They kept us on our toes and gave us a tough match for 80 minutes tonight.”

The Green Bears out-shot the Streaks 5-2 and had the advantage on corner kicks, 5-4.

Ryan King gets ready to pass to a teammate.– photo by Mary Huber

Radabaugh had three saves, while Geiger, who doubles as the Green Bears’ football place kicker and has committed to a kicking scholarship at Boston College, nabbed one.

“After graduating 10 seniors from a 13-3 team last year, some people thought we would be down,” he said.

“But our seniors really stepped up and provided leadership.

“I told the boys after the game that in going 19-1 and reaching the ‘Sweet 16,’ they’ve left a legacy for Archbold soccer, and that people know we’ve arrived.”