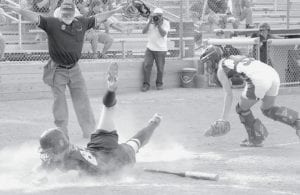 Archbold’s Devin Newman raises a cloud of dust as she slides safely across home plate in the fifth inning. An Alyssa Schaub sacrifice fly brought Newman home, closing the score to 3-2 before Elmwood hit a two-run homer in the sixth to win the regional semifinal 5-2.- photo by Mary Huber

The Royals (28-1) advanced to the state tournament with a 4- 2 victory over Colonel Crawford in the regional championship, Saturday, May 31.

Their lone loss this season has been to the Blue Streaks.

The loss ends Archbold’s season with a 21-7 record.

The Royals jumped out to a quick 3-0 lead in the bottom of the first inning. Two hits, combined with three walks, led to the early lead.

The Streaks scored a single run in the second inning on a Devin Newman run-batted-in single. Her single scored Jenna Nofziger, who was running for Morgan Ducey after Ducey singled.

With one out in the fourth inning, Dani Newman hit what appeared to be a homer over the left field fence. After an Elmwood appeal, the umpire ruled Newman out for not touching home plate.

The score remained 3-1 after four innings.

The Streaks scored another run in the fifth inning when Alyssa Schaub hit a sacrifice fly, bringing Devin Newman home.

Morgan Ducey fires a throw from home plate for Archbold. She went 2/3 at the plate against Elmwood.- photo by Mary Huber

Sarah Wyse pitched for AHS and gave up five runs on seven hits while striking out four and walking four.

The Streaks collected five hits, led by Ducey, who went 2-3. Dani Newman tripled; Schaub and Devin Newman had the other hits.

“This was a tough battle, just like we thought it would be,” said Joe Frank, AHS coach. “The first inning was a big key to the game. They jumped out to a quick 3-0 lead before we could get settled in.

“We fought back, and could have tied the score without Dani’s homer being erased. It was a tough call, having a run taken off the board, but our team showed a lot of character. We bounced right back the next inning and scored, but the tworun homer in the sixth sealed our fate.

“I couldn’t be any prouder of this team for the way we fought through adversity, not only in this game but earlier on when we lost Lauren (Kern, AHS pitcher) to a knee injury. We lost to a state-bound Elmwood team that is now 28-1, and there is certainly no shame in that.

“They have a combined 11 letters that they won playing softball, and each has contributed greatly to our success these past three or four years.

“Even more importantly, they are quality people who will all be successful in life because of their character.

“The good news is that we have a great nucleus back next year to build around. It will take a lot of hard work, but we have a chance to be a very competitive team next year.

“I am truly blessed for the opportunity to work with such a great group of young ladies, as well as the assistant coaches on the team.”