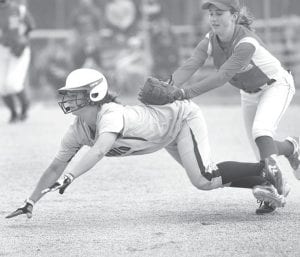 After driving in a run, Faith Wyse gets tagged between first and second base by Eastwood’s Hannah Owens in their district final. Wyse was hurt on the play when Owens’ leg got tangled in Wyse’s and Owens rolled on Wyse’s leg.– photo by Mary Huber

Eastwood lost to Archbold 2-1 in the district softball finals in 2016, but returned the favor in 2017 as the Eagles defeated the Streaks 6- 3, Saturday, May 20, in the Division III district championship game at Maumee.

“They put some great swings on the ball in the second inning and scored some runs, and I think we were just a little tentative at the beginning of the game.

“But we didn’t give up, and we came back and battled, and we were in it right there at the end.

“It just wasn’t quite enough.

Eastwood (26-3) scored five runs in the second inning and one in the third for a 6-0 lead that held until the fifth inning.

With Maddie Recker on second base, Macey Fix hit her first of two home runs on the day to give the Eagles a 2-0 lead.

After Sam Rost walked and then advanced to second on a sacrifice bunt, Alissa Ray’s hit to centerfield put Eastwood up 3-0.

Maddy Dyer’s grounder to third was overthrown to first base, and Ray scored.

Ashley Hitchcock’s single down the first base line drove in Dyer from second, giving Eastwood a 5-0 lead.

Fix’s second home run of the day came in the third inning, giving the Eagles the 6-0 advantage.

Archbold finally got on the scoreboard when Alexa Wilson brought in Kaitlyn Beck on a hit to left field in the fifth.

The Streaks scored two runs in the sixth with two outs. Beck had a single to right field, which brought home Madison Roth from second base.

Faith Wyse brought home Beck to put AHS within three, 6-3, at the end of six, and the rain began to fall.

The Streaks had two runners on base in the seventh, but Alyssa Ziegler’s fly ball to center field was caught, ending their hopes of a district title.

“If that ball is down we score two runs, and now the pressure’s on them to keep us from scoring again,” said Thiel.

“I can’t say enough about these kids,” said Thiel. “Nobody picked us to do anything this year.

These kids didn’t buy into that, and they knew if we stuck together as a family and we kept our nose to the grindstone… that we could make things happen, and we did.

“We set the goal at the beginning of the year that we want to be playing our best softball at tournament time, and we talked this morning, here we are.

“We put it together and we did exactly what we set our minds out to do, and just fell short today.”

“I have no words” about Ziegler, said Thiel. “She was a warrior. She was injured part of the season and she just battled.

“She gave everything she possibly could to this team and led us.

“Peyton (was) behind the plate, and the relationship those two had, and was a warrior back there, as well. (She) just was a wall, and kept this team together.

“McKenna really started playing her best softball at the end of the year, too.

“And Audrey– she didn’t get the innings she had hoped for or that she would have liked to have had, but supported this team and filled her role as a role player to the best of her ability.

“These kids are going to be missed greatly. We’ve got some big shoes to fill.”