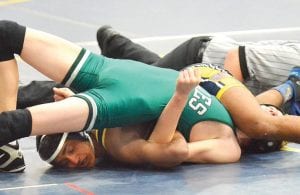 It was an early exit for the Archbold wrestlers after falling to Delta 40-29 in the quarterfinals of the Region 17A Dual Team Tournament, Wednesday, Jan. 24, at Archbold.

Swanton then defeated Delta 47-27 to advance to the regional semifinals, where the Bulldogs face Wayne Trace, today, Wednesday, at Swanton.

Liberty Center and Otsego meet in the other semifinals.

Winners square off in the finals, vying for a berth in the state quarterfinals.

“When athleticism was close, we did not fight through being tired and we were not aggressive,” said Brian Becher, AHS head coach.

“Their kids wrestled tough. Bonus points were big in their favor.”

The match started with Delta grabbing an early 12- 0 lead after Robbie Boulton won by forfeit at 106 pounds and Zack Mattin pinned Shane Eicher at 113 lbs.

Mason Babcock (182 lbs.) tried to keep Archbold in the match by pinning Spencer Goodsite to make the score 30-23, but Delta took the next two matches with a Dylan Rogers pin over Gibson Burkholder (195 lbs.) and a Dalton Richard 9-1 major decision over Trevor Short (220 lbs.) to seal the win.

“Biggest disappointment was a lack of aggressiveness from our feet and wrestling to not lose instead of going out there to score points,” said Becher.

“Until they get past that, they’re not going to be very successful at the end of the year.

“Hopefully we learn from it and wrestle more aggressively.

“The whole point of wrestling during the season is to get better, so obviously there’s a whole lot of learning opportunities after tonight.”