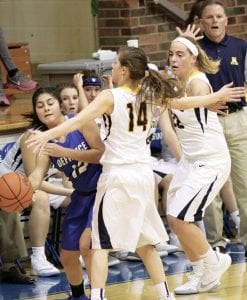 Left: With the Archbold team watching in the background, Gabby Nafziger (14) and Andi Peterson try to trap Defiance’s Jordan Davis along the sideline in the championship game of the Defiance Physical Therapy Classic. Right: Blair Bucklew

Going for its eighth Defiance Physical Therapy Classic title and sixth in the past seven years, Archbold slammed into a Defiance team that shot 48% in the semifinals and 51% in the championship game, falling 58-48, Tuesday, Dec. 12.

It was the first Classic title for the Bulldogs in 11 years, since 2006.

“Getting in foul trouble hurt us a little bit. When Lily Krieger got in foul trouble, Defiance did a nice job getting Kennedy Replogle (at center) the ball.”

The Streaks took their first lead in the contest, 35- 34, on an Emie Peterson three-pointer with 1:41 left in the third, but Poling hit two straight buckets to give Defiance a 38-35 lead going into the final period.

An E. Peterson free throw and Kam Hostetler layup tied the score at 38. Poling again hit for Defiance, followed up by a layup from Hostetler for a tie at 40. 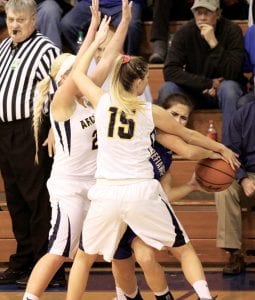 (15) gets her hand on the ball when she and Emie Peterson try to prevent Morgan Wityk from passing the ball.– photos by Mary Huber

The Streaks defeated the Rams 70-31 in the semifinals of the DPT Classic, Monday, Dec. 11.

“We did a nice job forcing turnovers and getting our hands on a lot of passes,” said Ziegler.

“After a rough first quarter shooting, we did a better job knocking down the open shots. Our team defense was a big factor tonight.

Brooke Kohler eyes the basket and takes a shot against Defiance. She scored five points in the contest.– photo by Mary Huber

“I also thought we did a solid job at the foul line. We also had some nice unselfish passes.”

Hostetler led AHS with 16 points. Blair Bucklew and Lily Krieger were also in double figures, with 11 and 10 points, respectively.

Archbold finished a busy week with a 60-33 Northwest Ohio Athletic League victory over Evergreen (3-3, 0-1 NWOAL), Friday, Dec. 15, in the Thunderdome.

“We got off to a slow start and got going midway through the first period,” said Ziegler.

“We played a solid game tonight. Lily Krieger played strong inside; Kamryn Hostetler did a nice job running the offense and knocking down shots.

“Blair Bucklew and Brooke Kohler had nice defensive games. Andi and Emie Peterson had some nice fast breaks, and Gabby Nafziger was solid.

“It was a nice league opener.”

The Streaks outscored the Vikings 31-13 in the second half for the win.

The Blue Streaks had a huge rebounding advantage, 29-13, led by eight from A. Peterson.

Evergreen committed 21 turnovers to 15 for Archbold.