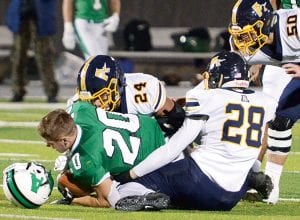 Above: Riley Huelskamp (20) has his helmet knocked off after being tackled by Noah Gomez (24), Caleb Ranzau (28), and Carson Meyer (50). Left: Caleb Hogrefe (7) looks for an opening to run, but Anna’s Brandon Shannon blocks the AHS junior from a clean getaway.– photos by Mario Gomez

When the season started, Archbold was picked to finish no better than third in the Northwest Ohio Athletic League football standings.

The Streaks exceeded expectations, finishing with a share of the NWOAL championship, dominating league rival Wauseon 38-0, and winning a pair of playoff games– including over Liberty Center and avenging their only loss of the regular season.

It’s the first time in school history the Rockets have advanced to the state semifinals.

“Anna is a heck of a football team,” said David Dominique, AHS head coach. “I’m sure they have a very good future ahead of them.

“I’m very proud of all our players. They left it all on the field. Not many people gave us a chance to get to this point this year.”

On its opening drive, Archbold moved from its own 25- yard line to the Anna 27 before turning the ball over on downs. 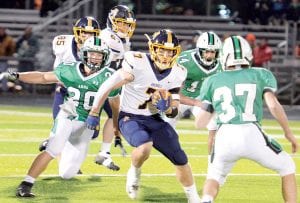 The Rockets advanced to the Archbold 37 after a Bart Bixler run of 36 yards.

Riley Huelskamp, Division VI Southwest District Player of the Year, ran the ball four straight times to get to the 1 before Bixler scored for a 7-0 lead.

Archbold went three-andout, giving Anna the ball at its own 43.

On Anna’s second play, Huelskamp scooted 42 yards for another Anna touchdown and a 14-0 lead with 3:00 remaining in the first quarter.

Archbold’s next drive stalled at the Rocket 49.

Anna called on Huelskamp again. The senior ran 44 yards to the Archbold 8 and scored on the next play to extend the difference to 21-0 with 11:01 left in the half.

Archbold moved from its own 24 to the Anna 42 on its next drive. A lateral pass from Newman to Antonio Cruz fell incomplete, but needed to be recovered by the Streaks to retain possession.

Anna’s Brandon Shannon scooped the ball up and raced 36 yards for another touchdown and a 28-0 advantage.

The Streaks had an opportunity to put a score on the board before the half ended, but a pass intended for Elijah Zimmerman fell incomplete in the end zone as time ran out.

Wrong Side Of A Running Clock

Anna opened the second half with a Bixler-to-Nolan Emerson 36-yard touchdown pass for a 35-0 lead.

Archbold cornerback Tony Grime deflected the pass, but Emerson made a juggling catch for the score.

For the first time all year, the Streaks were on the other end of a mercy rule running clock (when the difference is at least 30 points, the clock continues to run).

Archbold responded with a nine-play 65-yard scoring drive that ended with a Newman-to-Cruz 18-yard touchdown pass to close to 35-7 with 4:13 remaining in the third.

With the difference less than 30 points the running clock was stopped, but after a nineplay drive that ate up nearly six minutes of clock, Huelskamp scored from 2 yards out for a 42-7 advantage.

After a change of possessions the Streaks took the ball with 3:48 left and advanced to the Anna 22 before time ran out.

“It seemed like we were so close so many times, but they have a great defense,” said Dominique. “They made it tough on our playmakers.

“But our kids never quit, and that’s what it’s all about.

“These last three weeks have taught us a lot about ourselves. It’s a good springboard into next season.

“There’s a lot of pride in Archbold football.”

Newman threw for 117 yards on 11-22 passing with one touchdown and one pick.

Cruz snagged five passes for 83 yards and one touchdown.

Huelskamp rushed 15 times for 161 yards and three touchdowns for Anna.

It was the final performance for 11 seniors donning the Blue and Gold.

In their four seasons, the Class of 2020 had a combined record of 33-12 with a pair of NWOAL championships and a regional runnerup finish.

“You’re only as good as your seniors,” said Dominique. “The four years they’ve been here, we’ve never had a losing season.

“They had a lot of faith and a lot of confidence in each other. They really led all the younger guys and left a lasting impression on all of us.

“It’s been a lot of fun, and I’ve enjoyed every single minute of it.”