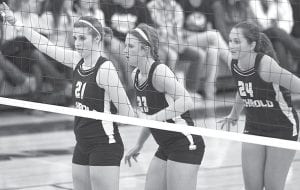 Nicole Hurst, Sarah Wyse, and Jenny Lehman, from left, wait for Taylor Coressel to serve the ball before switching positions in Archbold’s sectional semifinal with Swanton. Lehman, a sophomore, led AHS with 13 kills in its sectional final battle with Tinora, while Hurst, a senior, had 12. Wyse, a senior, was 75/77 in setting.– photo by Mary Huber

The Archbold volleyball team forced a fifth game before falling to Tinora in a Division III sectional final at Archbold, Saturday, Oct. 23.

The Streaks, who were seeded second in the Archbold sectional, advanced to the championship by defeating Swanton 25-17, 25-14, 25-18, Tuesday, Oct. 19 in a sectional semifinal.

The Streaks finish their season with a 16-8 record. The Rams advance to the district semifinal at Kalida with a 16-7 record.

Archbold led 12-7 in the first game before Tinora worked its way to a tie at 17.

The score was tied again at 23 when Archbold called a time-out. The Streaks were at game point, 24-23, when Abby Short’s spike was blocked out of bounds.

But Archbold couldn’t put the game away. A Blue Streak spike went out of bounds, and Tinora’s Kendra McCann tipped the ball at the net to give the Rams a 25-24 lead. McCann blocked Nicole Hurst’s spike at game point, giving Tinora the game, 26-24.

Game two was all Tinora, as the Rams raced out to a 22-3 lead. Haley Reineke scored the game-winning point on a kill.

Archbold began its climb up the hill in the third game. After the Streaks scored three straight points to break a tie at 17 to go up 20-17, Tinora called a timeout.

The Streaks won the game when Tinora’s dig of Gerig’s spike at game point went out of bounds.

Archbold tied the match at two games each with a 25-23 win in the fourth. The game stayed tight throughout, and with a 22-18 lead Gerig served Archbold to game point with two straight aces.

Two straight AHS net violations allowed Tinora to close the gap to 24-20. A long spike and miscommunication on Archbold’s side tightened the difference to two, 24-22, and AHS called a time-out.

An Archbold spike soared out of bounds on the next play, which closed the score to 24-23, but miscommunication on Tinora’s side allowed the ball to drop, giving AHS a 25-23 victory.

The Rams jumped out to a 6-1 lead in the fifth game when Archbold called a time-out. Hurst came out of the huddle and got the side out for AHS with a spike. The Streaks were down 6-3 when Hurst blocked a spike by McCann, then followed with three kills in the next four plays. The score was tied at 7.

Control of the ball went back and forth, and the score was tied at 13 when Archbold called a time-out. Jenny Lehman hit a long spike that Tinora tried to dig, but failed, putting Archbold at match point.

The Rams called a timeout.

Archbold’s spike went into the net, and the score was tied at 14. Tinora blocked a spike by Short, putting the Rams at match point.

Archbold was called for a setting error on the final play, giving the game and match to Tinora.

Jenny Lehman led AHS with 13 kills, while Hurst had 12 and Gerig had nine. Short had two solo blocks.

To accomplish great things, we must not only act, but also dream; not only plan, but also believe.–Anatole