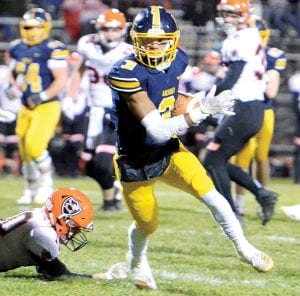 Antonio Cruz (3) tucks the ball, avoids a tackle, and races away in the Div. VI regional quarterfinal against Coldwater. The junior wide receiver caught five passes for 83 yards and one touchdown in the 27-21 victory.– photo by Mario Gomez

Elijah Zimmerman hauled in a 28-yard touchdown pass with no time left on the clock to propel Archbold past Coldwater 27-21 at AHS, Friday, Nov. 8, in the Division VI Region 23 quarterfinals.

“I’m very proud of what our guys did tonight,” said David Dominique, AHS head coach. “The MAC (Midwest Athletic Conference) is a great conference with some great teams, so it’s a good win for our guys.

“Our guys hung tough all the way to the end.”

The Streaks face Northwest Ohio Athletic League co-champion Liberty Center in the regional semifinals Friday night in a rematch from week 6, when the Tigers defeated Archbold 39-36.

Archbold (10-1) took the opening kickoff at its own 35- yard line and marched down to the Coldwater 2 in four plays.

The Cavaliers’ defense stiffened and stopped a fourth down play to take over at their own 2.

Coldwater (8-3) came back with a drive that moved down to the Archbold 15, but a Brady Klingshirn field goal attempt sailed wide right as the game remained scoreless as the first quarter ended.

After an unsuccessful Archbold drive, the Cavs took over, marched 68 yards in seven plays, and scored on a 4-yard pass from Jake Hemmelgarn to Nate Miller for a 7-0 lead with 5:51 left in the first half.

The Streaks answered by driving 50 yards in five plays, scoring on a DJ Newman 3- yard run to tie the game at 7 with 4:13 on the clock.

After Coldwater went three-and-out, 2:34 was left in the half.

Starting at its own 23, Archbold moved the ball to the Cavs’ 48 and used a little trickery to set up its next score.

Newman pitched back to Antonio Cruz, who looked downfield and found Brandon Taylor with a 38-yard reception to the Coldwater 11.

On Coldwater’s second possession of the second half, Archbold’s Caleb Hogrefe intercepted Hemmelgarn, but the Streaks couldn’t capitalize and gave the ball back at the Coldwater 40.

The Cavs moved the ball quickly into Archbold territory and hit pay dirt on a Hemmelgarn-to-Miller 8- yard touchdown pass to tie the game at 14 with 1:06 left in the third.

Archbold answered again, starting a drive at its 28 and moving to the 46 in six plays before Newman found Cruz, who broke two tackles, for a 54-yard touchdown pass to retake the lead at 21-14.

Coldwater gave the ball away on a Zimmerman interception, but once again the Streaks couldn’t turn the turnover into points.

Archbold punted to the Coldwater 21 with 4:32 remaining.

The Cavs used the run and pass to move the ball to the Blue Streak 16, finishing the drive with a Hemmelgarnto Will Broering touchdown pass to tie the game at 21.

The Streaks had moved to their own 49 before Newman was sacked for a 4-yard loss, forcing Archbold to use its final time-out with 26 seconds left.

Newman found Zimmerman for a 19-yard completion to set up AHS at the Cavs’ 36.

After an incomplete pass and a Coldwater time-out, Newman found Gomez for an 8-yard completion to move the ball to the 28 with six seconds on the clock.

On the final play of the night, Newman floated a pass into the waiting arms of Zimmerman with no time remaining for a 27-21 win.

“Every week we prepare that two-minute drill, and it just worked out,” said Dominique.

“Zim is one of those guys who wanted a chance at it. We knew (Coldwater) had a lot of eyes on Cruz, so we motioned him across the field and got Zim one-on-one just how we wanted.”

“They threw the ball to me earlier and I dropped it,” said Zimmerman. “I told coach throw it to me again and I’ll catch it!

“It continues our season, and that is the biggest thing overall.

“I didn’t want it to be my last game on my home field and go out the wrong way.”

Archbold had 402 yards of total offense to 354 for Coldwater. The Streaks racked up 313 passing yards and 89 yards rushing.

Newman was 21-27 passing for 276 yards and two touchdowns. He rushed for 31 yards with a touchdown.

Gomez rushed for 53 yards on 16 carries with a touchdown.

Cruz caught five passes for 83 yards and a score.

Taylor had 76 yards on three receptions.

Hemmelgarn was 18-30 for 188 yards with three touchdowns and three interceptions.

Zack McKibben rushed for 63 yards on nine carries. Broering had six receptions for 87 yards with one TD and Miller had nine catches for 84 yards and two touchdowns.