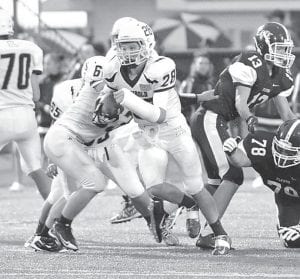 Archbold traveled to Millbury, Friday, Sept. 11, to face the Lake Flyers in a non-league contest of undefeated football teams.

The Streaks found themselves treading water early and never recovered, falling 45-0, only the 46th time in AHS history that Archbold has been shut out.

It was the first meeting between the two squads, but a familiar face paced the sideline of the Flyers.

Mark Evans, former Wauseon head coach, enters his third season at the helm of the Flyers and has compiled a 19-5 record.

The Flyers (3-0) strutted their power early, scoring behind the power running of Branden Short at the 4:57 mark of the first quarter. With the point-after-touchdown kick, the host was up 7-0.

Less than a minute later, the Flyers struck again. Short scored on a 6-yard run for a 14-0 advantage.

As a team, the Flyers totaled 432 yards of offense– 394 yards rushing and 38 yards passing. 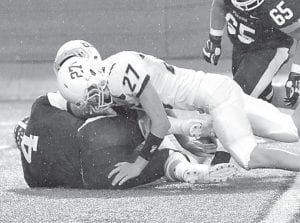 Lake took a commanding 31-0 lead into the locker room. Signal caller Jacob Rettig connected with Drayton Williams on a 36-yard strike to end the first quarter and ran for a 45-yard touchdown in the second.

Adam Duncan finished the first half by hitting a 37- yard field goal.

The Flyers also dominated on the defensive side, giving up only 141 yards of total offense and shutting out the Streaks.

It was the Flyers’ third shutout of the season and the first time AHS has been held scoreless since 2004, when Wauseon recorded a 6- 0 victory.

After Short scored on a 21- yard run in the third quarter, the Flyers put the icing on the cake with a Duncan 39-yard touchdown run in the fourth for the 45-0 final.

“That is a big, strong team,” said David Dominique, AHS head coach. “We knew that coming in. We knew they would be physical.

“We just didn’t come out fired up, and it showed right off the bat. We had some turnovers, and you can’t have that.

“Branden Short will be one of the best running backs we will see all year. He has size, speed, toughness– he has it all.

“We’ll put this game behind us and get ready for next week, (when) we move into league play.

“We told the kids this is just a blip in our radar and we have to move onto the next game.”