Above: Luke Kammeyer penetrates to the basket in Archbold’s NWOAL showdown with Evergreen, Thursday, Dec. 9. The junior scored 10 points in the Blue Streaks’ 64-50 victory. Below: Zeb Frank drives to the basket. The sophomore scored 16 points in the league battle.–photos by Scott Schultz

It may have been too early in the season for a Northwest Ohio Athletic League boys basketball showdown, but with Archbold and Evergreen picked to be at the top of the league, an early-season showdown was played out at AHS, Thursday, Dec 9.

“I told my kids it’s great to play Archbold early, because you find out how good you are right away,” said Jerry Keifer, EHS head coach.

“I think we are ok. If we play Archbold again we will be a lot better, and I am sure they will” be better, too, said the coach.

Archbold (2-0, 1-0 NWOAL) came out hitting on all cylinders. Telly Fricke took the opening tipoff and drained a three-pointer to get the Streaks on the board.

Archbold rattled off the next six points. Tyson Dietrich scored on a put-back, Fricke drove the baseline for two, and Clay Giesige scored two off a fast break. 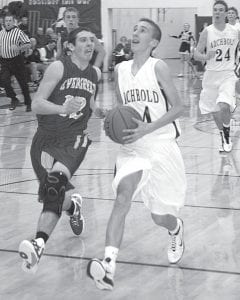 Evergreen scored the next six points to keep the difference close at 9-8. Archbold outscored the Vikings 15-6 in the last half of the first period for a 24-14 lead.

“We did get an early lead, and that was good to see,” said Doug Krauss, AHS head coach. “I was real pleased with our transition defense. We were able to hit some shots to get us going.”

Luke Kammeyer picked off a Viking pass at the Evergreen foul line and outraced everyone to slam a two-handed dunk to boost the lead to 26-14.

Garrett Morton scored on a pair at the charity stripe. The Evergreen drought fi- nally ended at the 4:30 mark when Wielinski and Dan Hilton hit back-to-back buckets.

“Archbold just came out and shot the lights out that first quarter,” said Keifer.

Fricke answered for the Streaks, and Evergreen’s Cory Mossing hit one at the foul line. Dietrich scored on a turnaround jumper and Fricke scored a deuce off an Evergreen turnover.

Mossing connected again for the Vikings, and Aaron Wyse hit a jumper for the Blue and Gold. The Vikings scored the last six points of the quarter, closing the once 15-point Archbold lead to 11, 37-26, at halftime.

“Our goal going into the game was to shut down Morton,” said Keifer. “We felt Morton was the best player on the team.”

Another goal was to “take away the inside from Kammeyer, and we did that,” said Keifer.

“But tonight’s game was probably the best game I have seen Telly Fricke play, and I am glad he decided to have it against us. He just really played well. Once Archbold got the lead he just really took control. If Archbold is going to win the league he is going to have to play like that.”

“Telly has been solid for us. We need him to play solid for us, and tonight he did that,” said Krauss.

Fricke, who led all scorers with 21 points, tallied 14 in the first half. Tyler Good led the Vikings with 20; 13 were in the first 16 minutes.

Zeb Frank scored 16 points, hitting 7-8 at the foul line in the closing minutes. Kammeyer chipped in 10.

Wielinski added 11 and Lucas Pennington chipped in 10 for the Vikings.

“Tonight we hit some big foul shots down the stretch, and that was big,” said Krauss. “A year ago we were not the best foul shooters collectively as a team. This year we will get better as a team. We have some guys that are better foul shooters, and hopefully that will continue.”