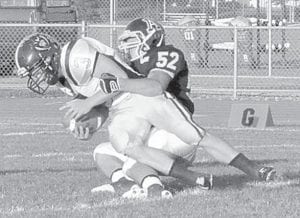 With the score tied at 7 at halftime, Archbold outscored Evergreen 17-0 in the second half for a 24-7 Northwest Ohio Athletic League football victory, Friday, Sept. 14, at AHS.

A defensive first 12 minutes had the score knotted at 0.

The Vikings crossed the goal line first. Mitch Carter capped off a 16-play drive that spanned the first and second quarters for a 7-0 lead at the 8:18 mark of the second.

It was the last time they scored.

The Streaks knotted the score when quarterback Evan Wyse spotted Levi Wyse for a 9-yard touchdown toss with 5:30 left in the second.

The Streaks took a 10-7 lead in the third when Lincoln Parsley, who just missed a 41-yard field goal attempt in the second quarter, hit a 34-yard field goal.

Evergreen was forced to punt on its next possession.

Evan Wyse picked up 23 yards on the ground and hit Tyson Dietrich for a 15-yard gain, but the senior lost the handle on the ball with Evergreen’s Kyle Brighton recovering.

Lincoln Parsley pulls in the football for one of five catches he had against the Vikings.– photo by Mario Gomez

The Vikings again could not pick up a first down and were forced to punt, but a roughing-the-kicker penalty called on AHS kept the Vikings’ hopes alive.

Jake Willeman then picked up 7 yards on the ground on two carries. Carter added 3 for a first down.

Signal caller Matt Taylor dropped back to pass but was intercepted by Parsley, who returned the ball to the Streaks’ 29-yard line.

Four plays later, Archbold had a 17-7 cushion when E. Wyse crossed the goal line from 1 yard out with 8:02 left in the fourth.

“That was a huge pick,” said Bryan Miller, AHS head coach. “At that time, we were only up three and Evergreen was driving, so to get that and come back to get the touchdown, that changed the game right there.”

Archbold secured the win when Dietrich busted down the left side of the line, bowling over defenders and outracing the Vikings for a 60-yard touchdown run with 4:14 left.

The AHS defense played a stellar game, giving up just 214 yards of total offense– 80 yards through the air and 134 on the ground.

On the offensive side, Dietrich led the way with 102 yards on three carries. He finished the night with 85 receiving yards.

“This was a good game all the way through,” said Miller.

“We did get off to a slow start offensively, but again the defense played really well for us tonight and kept us in the game.

“That’s the biggest thing; when we take forever to score, if the defense isn’t doing their job the game could get away from us pretty quick. But the defense has kept us in all the games.”