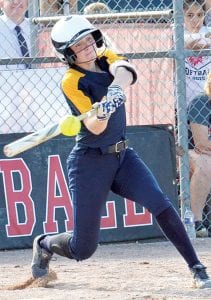 Wauseon won at least a share of its ninth Northwest Ohio Athletic League softball title, and its second straight, with a 7-6 win over Evergreen, Thursday, April 25.

Archbold (14-8) entered the week leading the league at 4-0, but two straight league losses to the Indians and Patrick Henry dropped the Streaks to second place in the NWOAL at 4-2.

Leading 4-3 going into the fifth inning, the Indians exploded for eight hits in the fifth and sixth innings on their way to a 12-5 victory, Monday, April 22, at Wauseon.

Chloe Schramm suffered the loss on the mound. In 4 2/3 innings she allowed seven runs on seven hits, struck out two, and walked two.

With the score tied at 10 after seven innings, Archbold scored the winning run in the top of the eighth inning to defeat the Panthers (11-5) 11-10, Tuesday, April 23, at Paulding.

Bralynn Blanton got the win on the mound. In 7 2/3 innings she allowed 10 runs on 11 hits, struck out five, and walked nine.

The Streaks had 15 hits. Schramm, Madison Roth, and Blanton each hit a home run; Roth also had a base hit while Blanton had two.

Gabby Nafziger hit a double. McCoy, Wyse, and Grace Mayer each had two singles. Sauder and Alexa Wilson each hit a single.

Patrick Henry (8-4, 3-2 NWOAL) scored the winning run on a passed ball in the bottom of the seventh inning for a 5-4 walkoff NWOAL victory, Thursday, April 25, at PHHS.

Blanton suffered the loss. In two innings she allowed one run on no hits, struck out four, and walked two.

The Streaks had six hits. Sauder had a triple and two base hits; Schramm had a double. Roth and Wyse each had a single.

Memorial Park was the site of a double header between Archbold and Genoa, Saturday, April 27.

The Comets scored the winning run in the fourth inning to capture the first game 3-2, despite getting only six hits to 11 for Archbold.

Wyse and Blanton each had a double and a single. Nafziger and Sauder each had two singles, while Schramm, Wilson, and Mayer each had one.

Blanton pitched a complete game and suffered the loss. In seven innings she allowed three runs on six hits, struck out 13, and walked five.

The Streaks scored six runs in the third and fifth innings on their way to a 14-8 win in the second contest.

Andee Grime got the win. In 2 2/3 innings she allowed no runs on one hit, struck out two, and walked one.

The Streaks had nine hits to Genoa’s 11.