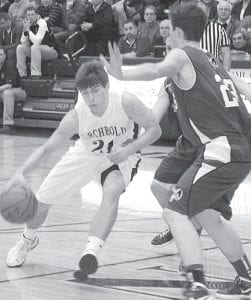 The Streaks started fast and held off a second-half run by the Rams to lay claim to a 45-36 win.

The victory advanced AHS (17-5) to the district championship game, Saturday, March 10, where they faced Ottawa-Glandorf. The Titans defeated Patrick Henry 38-35 in their semifinal.

Archbold looked to put the game away early, taking the opening tipoff and scoring on its first three possessions for a 6-2 lead just minutes in.

Archbold ended the first quarter with a 17-8 lead, scoring on three straight three-pointers to end the period.

“We talked about being aggressive at both ends of the court tonight, and I thought we did that.

“We hit shots, and I thought that juiced us up at the other end.”

The Streak defense stiffened in the second period, giving up just seven points. On the offensive end the Blue and Gold dumped in 12 more for a 29-15 lead at the halfway point.

Kammeyer started the scoring with a jumper. Tinora’s Jake Mahnke hit a deuce and Cameron Harris added one from the foul line to close the gap to 19-11.

Archbold scored the next eight points while holding the Rams to just two field goals in the quarter.

“We are one of the smaller teams in the area this year, so we had lived and died by the three-point line,” said Rob Mahnke, Tinora head coach.

“We had won a lot of games that way. Unfortunately, tonight we struggled shooting and fell behind early.”

Tinora (13-9), not ready to have its season come to a close, mounted a run in the second half.

Archbold came up empty on its next possession while J. Mahnke hit a jumper.

Tinora closed the gap to 33-24 when Lehman converted an Archbold turnover into two points.

Dietrich hit a turnaround jumper and Robert Wuo, who led the Rams with eight points, buried a three as the Streaks held a 35-27 lead to start the final eight minutes.

The two squads exchanged baskets throughout the fourth, with Kammeyer hitting a five-footer to start the period.

Kurt Kahle closed the difference to 37-30 with a three from the corner.

Gabe Rodriguez answered for Archbold with a jumper. Liska, who finished with six points, hit a ten-footer.

Kammeyer came back with a deuce and Lehman connected on one from the charity stripe.

Dietrich closed out the scoring for the Blue and Gold with a jumper and muscled his way inside for two more.

Wuo closed out the Rams’ scoring with a three for the 45-36 final.

“We told the guys we had to pick it up on the defensive end and play harder in the second half,” said the Tinora coach.

“I thought we made a comeback, but I think we gassed ourselves and lost our legs.”

“The first half I thought we got some easy buckets and ran the floor,” said Krauss.

“The second half credit Tinora– they came out and came at us and whittled the score down.

“I thought we came back and established ourselves inside, and scored with Luke and Tyson and stopped their momentum.”