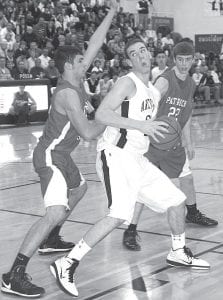 It was the first Friday night game of the season for the Blue and Gold.

The Streaks, ranked number one in the state in Division III by the Associated Press, remain undefeated at 14-0, 5-0 NWOAL.

Both squads played a close first half. Archbold led 13-10 after the first period and 24- 16 at the break.

The Patriots fell victim to the stingy defense of the Blue and Gold in the third period. PH was scoreless from the field; its only points were two foul shots from Kent Tietje, who led the Pats with eight points.

The Pats also felt the sting of 25 turnovers in the contest. The Streaks committed 12.

“We have talked from day one, if we are going to be a good ball club it will start at the defensive end,” said Doug Krauss, AHS head coach.

“We have guys that can score at the offensive end, but oftentimes your offense is generated by what your defense can do, and some nights your offense doesn’t work so you better have a defense.

“PH runs so much good stuff and are so well-coached. I was real pleased with our kids.”

Archbold rolled in the third period, scoring 14 points to build a 38-18 lead. Luke Kammeyer started the scoring with a pair at the charity stripe. Tietje answered with his pair at the foul line, then the Streaks rattled off the next 12.

Kammeyer came up with a steal and fed Tyson Dietrich for two. Garrett Morton hit from three-point-land, upping the score to 31-18. Kammeyer grabbed a missed PH shot and spotted Morton at the opposite end of the court for two more.

Kammeyer again came up with a steal and led a fast break, scoring a conventional three. The Archbold junior added a bucket in the paint to close out the quarter.

“Luke is really coming along, but it takes a couple of things for that to happen,” said Krauss.

“One, he has to get down underneath, and two, we have to have guys seeing him and getting him the ball. Teams try and take that away. They know he is a weapon for us, but the third part– he is making the play when he gets the ball.”

“Luke (Kammeyer) played well tonight,” said Kent Seemann, PHHS head coach. “We wanted to force them to shoot outside, and he (Kammeyer) was able to get a step on us in the post and get that quick turn.

“We didn’t do a good job of stopping that, but give credit to him. He made some plays.”

Kammeyer capped off his performance in the fourth quarter when Telly Fricke made a perfect alley-oop pass to the 6-foot-7 junior, who two-handedly slammed his 18th point.

“That third quarter was pretty solid, to say the least,” said Krauss. “We made some plays at both ends. That was good basketball on our part.”

“That third quarter wasn’t good,” said Seemann. “It would be one thing if it was a physical thing, if I didn’t think we had the players that were more than capable of competing with an Archbold team.

“This game came down to mental. Mentally, Archbold was able to get into us and take us out of anything we wanted to do.

“I am guessing in that third quarter we passed up a lot of shots we should have taken. Against a good defensive team, when you get an opportunity you have to take advantage of it and we didn’t.

“That is the part that is most disappointing. That’s not taking anything away from Archbold. They play tremendous defense.”