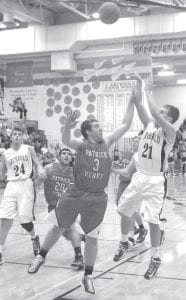 Jumping out to a 13-7 firstquarter lead, the Streaks, led by Zeb Frank’s 16 points, including four treys, never looked back.

The Patriots canned just two field goals in the first eight minutes. The Streak defense tightened the rope even more in the second stanza, holding the Patriots to just one field goal by Adam Prigge.

Prigge and teammate AJ Wagner each finished the night with nine points.

PH scored the first two points of the second quarter on a pair of free throws by Gabe Jones, while the AHS offense opened up a 12-point halftime lead.

Dietrich hit a pair at the charity stripe, and Taylor Price buried a three. Dietrich, who finished with 12 points, closed out second-quarter scoring with a jumper for a comfortable 23-11 halftime advantage.

“PH is struggling offensively, so I thought we could get after them pretty well,” said Doug Krauss, AHS head coach.

“You always worry about games like this because PH has great history, and you know they can break out someday. I was just glad it wasn’t tonight; this was a solid win for us.”

Archbold capped off a double weekend of basketball at Continental (5-9), Saturday, Jan. 19, and picked up a 63- 44 non-league victory.

Tyson Schnitkey led Archbold with 13 points. Frank and Dietrich chipped in 11 each.