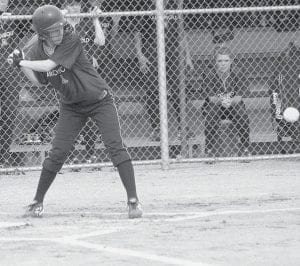 Andrea Allan has her eye on the ball. The Streaks had a nine-game win streak snapped last week when a combination of a solo home run and two unearned runs gave Evergreen a 3-0 lead going into the bottom of the seventh inning. The Streaks were only able to narrow the gap to 3-1 and suffered their first NWOAL loss of the season.- photo by Scott Schultz

Evergreen gave the Streaks their first league loss 3-1, Thursday, May 1.

AHS jumped out to an 11- 0 lead after two innings and cruised to the win. The Streak bats were booming early and often, garnering seven hits in the first inning alone.

The Streaks matched their run total of 11 after two innings with four more hits in the second.

All nine Blue Streaks had a hit by the end of their second at-bat. Lauren Kern, Alyssa Schaub, and Adi Lange all had two hits.

Kern struck out 11 while giving up only two hits in her five innings on the mound.

“This was a good league win for us today,” said Joe Frank, AHS coach. “We hit the ball extremely well today and played good defense behind Lauren.

“We continue to play well defensively and will have to continue that trend to be successful.”

The Streaks handed previously undefeated and Division III third-ranked Elmwood its first loss of the season.

Archbold jumped out to a quick 3-0 lead after one inning thanks to RBI singles by Stacy Wyse and Adi Lange.

The Royals tied the score with three runs in the second as Elmwood collected four of its five total hits in the contest.

The Blue Streaks recaptured the lead in the fourth after an Abbey Graber double and an Andrea Allan RBI single. The Streaks added two insurance runs in the fifth thanks to a double by Wyse, a single by Lange, and two ground-outs.

Kern was 4/4 while Wyse and Lange were 3/3 to lead the Streaks at the plate.

“We hit the ball extremely well again today,” said Frank. “Although we didn’t see their best pitcher, Dauterman, we still had some quality swings today.

“They are a good hitting team as well, and Lauren threw pretty well against them today. I would be surprised if they don’t make an extended tourney run. They are a good team and have an excellent pitcher in Dauterman.”

The Vikings handed the Streaks their first league loss to tighten the race for the NWOAL title.

The game was scoreless headed into the fifth. One swing by the Vikings’ Smith changed that. The solo homer and two unearned runs put the Streaks down 3-0 going into the bottom of the seventh.

AHS didn’t go quietly. Schaub, Lange, and Graber all singled with one out to narrow the gap to 3-1. A Dani Newman grounder advanced the runners to second and third with two outs.

A ground-out to shortstop ended the rally as the Vikes picked up a huge win in the league.

The Streak bats were silenced by Lexie Pinkelman as she held AHS to four hits. Kern was the tough-luck losing pitcher. She gave up only five hits, but the Streak defense failed to give her the support it has provided for most of the year.

Four Archbold errors led to two unearned runs, and that was the difference in the game.

Wauseon, Evergreen, and Archbold all have one loss in the league as the season winds down.

“We just didn’t play well enough today to beat a good Evergreen squad,” said Frank. “We didn’t get a lot of good swings at Pinkelman today, and our defense did not play well either.

“We still have a shot to get a piece of the NWOAL title, but we have three big challenges left in the league.

“I am confident we will bounce back and put ourselves in position to get a piece of the title.”