Streaks Close Out Season With Win Over Wauseon 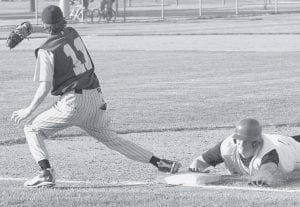 First baseman Collin Walker (11) catches a throw from Marc Miller to complete a double play against Wauseon, Tuesday, May 13. The Streaks finished their regular season with a 2-1 victory over the Indians.- photo by Scott Schultz

The Archbold baseball team closed out its 2008 season with a 2-1 victory over Wauseon, Tuesday, May 13.

The Streaks scored one run each in the bottom of the first and second innings. Wauseon didn’t score until the top of the sixth.

AHS posted a 13-11 record and was 4-4 in the Northwest Ohio Athletic League.

Marc Miller picked up the win, giving up one run on four hits, striking out four, and walking three in six innings. Steven Kinsman pitched in relief.

Jeff Jasso was the losing pitcher. He allowed two runs on two hits, struck out one, and walked five in six innings.

The Blue and Gold mustered only two hits, with Jack Downey going 1/1 with one run batted in.