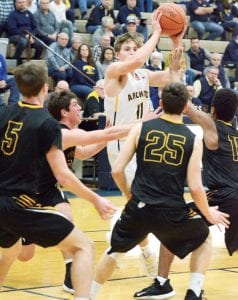 Elijah Zimmerman (11) draws the attention of a quartet of Apaches as he penetrates inside.– photo by Mario Gomez

“We earned that win,” said Joe Frank. “That’s the way it’s gonna be.

“We’re a blue collar team. We’re not gonna go out and score 75 (points), but that doesn’t mean we can’t be successful with a group like this.

“They are very coachable and are willing to work at it and get better, and that’s what it takes to improve over the course of the year.”

Archbold traveled to Wauseon for a non-league matchup that was postponed from Nov. 30.

The Indians led 13-12 after the first quarter, but Archbold bounced back to lead 25-20 at the half.

Wauseon cut the difference to 27-26 after three to set up the dramatic fourth quarter.

Trailing by a point, Jonas Tester, who led all scorers with 13 points, canned two free throws with 4.3 seconds left to give Wauseon the 36- 35 win.

The Streaks shot 37% from the field while the Indians shot 35%, but the difference came at the free-throw line. Wauseon was 9-10 while Archbold was 4-7.

Turn Around And Do It Again

The Streaks host the Indians tomorrow, Thursday, in the Northwest Ohio Athletic League opener for both teams.

“There’s not gonna be many secrets,” said Frank.

“I think we caught them off guard with the zone (defense). One thing that we’ve got to change: we’ve got to somehow figure out how to rebound the basketball.

“We can’t give up a 17-rebound margin to the other team and expect to win a game very often, and we almost did.

“We’ve definitely got to be more aggressive going after balls and more physical on checkouts.”

Ethan Hagans and Trey Theobald scored four points each to give AHS a 9-6 lead after one, extending it to 17- 12 at the break.

“We thought that the energy and effort was great, but we just couldn’t get the ball to go through the basket,” said Frank. “We tried to take their focus off the shooting and just said go out and play and have fun.

“You forget about what you’re not doing right, and sometimes that’s all it takes to make a few shots. And it can be a confidence thing.”

Fairview scored the first basket of the third quarter, but Alex Roth and Theobald answered with back-to-back three-point baskets for a 23- 17 lead.

Archbold outscored the Apaches 8-3 over the final five minutes of the period to go into the final eight minutes up 31-20.

“We did a really good job of handling their pressure, spreading the floor, passing the ball, and getting some layups out of it,” said Frank.

A strong defensive effort in the fourth secured the victory.

Fairview (4-5) scored five points, then had the door shut on it for the next five minutes while AHS scored the next six points.

Fairview finally scored with 23 seconds left, but the outcome was already determined.

“We had some opportunities that we didn’t capitalize on, but it’s not due to lack of effort,” said Frank. “As long as the kids go out there and play as hard as they can, that’s all you can ask as a coach.”

Theobald and Roth led Archbold with 13 and 10 points, respectively.