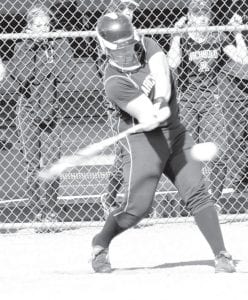 Blue Streak senior Morgan Cody makes contact with the ball. She was 2-3 at the plate against Montpelier.– photo by Mario Gomez

The Streaks also split a pair of non-league encounters, defeating Pettisville and losing to Sylvania Southview.

The Streaks took a 3-2 lead on a clutch two-run single by Cassidy Wyse in the bottom of the sixth, but Southview tied it in the seventh and scored three runs in the eighth to defeat the Streaks in a non-league contest, Tuesday, May 1.

Wyse also hit a solo home run in the third to account for all three AHS runs batted in.

Hannah Kern took the loss on the mound, giving up six runs on 13 hits.

Archbold broke open a scoreless game in the fourth by scoring four runs and went on to a 7-3 win over the Blackbirds, Wednesday, May 2.

The Streaks led 5-0 headed into the bottom of the sixth before PHS erupted for three runs on five hits.

A double play was turned by the AHS middle infield as Becca Gerig flipped to Cassidy Williams, who relayed the throw to first to end the rally.

Becca Gerig and Chelsea Goebel were both 3-4 at the plate while Wyse was 2-4.

Hannah Kern was the winning pitcher, giving up seven hits while striking out three.

Delaney Nofziger was the losing pitcher. In seven innings she allowed seven runs on 10 hits, struck out two, and walked none.

Bontrager with a double. Lexie King hit two singles. Kate Nofziger, Emily Hubby, and Lauren Frey each had a single.

Archbold fell behind 1- 0 before tying the game on a sacrifice fly off the bat of Hanna Allison in the fourth inning against Wauseon (4- 15, 1-4 NWOAL), Thursday, May 3.

The Streaks then played small ball using an error, two bunt hits, and an RBI single from B. Gerig to take a 3-1 lead in the fifth.

Archbold added two insurance runs in the sixth, getting RBI bunt singles with two outs from Mindy Rupp and Williams to make the fi- nal score 5-1.

Wyse led the way at the plate, going 2-2 with a double and an RBI. Rupp and Williams each were 2-3 at the plate.

Kern pitched a four-hitter while striking out seven and walking only one.

The game was suspended in the first inning on Monday, April 30, and was completed on Friday, May 4.

AHS jumped out to a 7-0 lead after two and cruised to the victory.

B. Gerig was 3-3 with a double and an RBI while Megan Gerig was 2-3 with two doubles and an RBI. Beck and Morgan Cody also were 2-3.

Kern was again the winning pitcher. She gave up only one run on seven hits while striking out three and walking one.

“We let one get away in the seventh inning against Southview but won two key NWOAL contests to clinch a title tie.

“It is quite an accomplishment for these young ladies, as well as the previous six (teams), to win or share an NWOAL title. We have been blessed to have a lot of good players that have contributed to the title run.

“Credit goes to these young ladies for a pretty good run the last seven years. We look forward as we seek to clinch an outright title and begin sectional play.

“Hopefully we can play our best ball of the season as we begin our ‘second season.’ We are hoping Hanna Allison is healthy enough to begin pitching again, but we are also confident that Hannah Kern can do the job. She has improved greatly over the past two weeks against some top-notch opponents, and that bodes well for us in the future.”

Archbold plays last night’s winner between Paulding and Tinora for a Division III sectional championship, Thursday, May 10, at AHS.