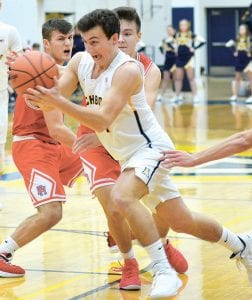 Andrew Hogrefe breaks to the basket in the Thunderdome against Patrick Henry, Friday, Jan. 18.– photo by Mario Gomez

“It was a good, solid win for us,” said Joe Frank, AHS head coach.

“We talked about getting off to a good start and making it difficult for them to get good looks early.

“We did a really good job defensively, and although we didn’t necessarily shoot the lights out, we converted enough and got enough stops to put some distance between ourselves and them.”

Elijah Zimmerman and Jeron Williams scored the first eight points for AHS before the Patriots answered with a field goal.

After a PH three-pointer, Andrew Hogrefe scored the final points of the quarter for a 19-5 lead.

Austin Wiemken scored 12 points in the second period to help Archbold double up on the Patriots, 38-19, at the half.

The reserve players came in for the Streaks and kept the lead at 29 points after three, 57-28.

Frank sent his starters back on the court to start the final quarter but pulled them after two minutes, leading 65-31.

The bench finished the game and held an 8-6 advantage over the final six minutes for the 73-37 win.

“It’s always good to get kids coming off the bench, because they work just as hard as the starters in practice,” said Frank.

“We can practice against each other every day, but it’s still not the same as playing against somebody in another color uniform.”