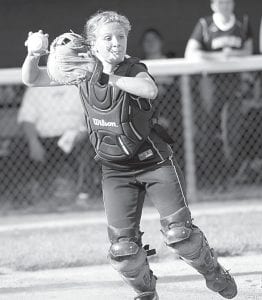 Blue Streak catcher Peyton Driver throws out Bluffton’s Alexis Lugibihl at first base for the Pirates’ second out in the fifth inning of their district semifinal.– photo by Mary Huber

Natalie Beck led off the game with a line drive to left field that eluded the left fielder. By the time the throw came into the infield, Beck had circled the bases and the Streaks led 1-0.

The next seven AHS batters collected hits, and the score was up to 5-0.

By the time Becca Gerig singled, Cassidy Wyse doubled, and Hanna Allison homered, all still in the first inning, the score was 11-0.

Archbold erupted for seven more runs in the third inning. Payton Robinson had a two-run single and Gerig, a bases-loaded double that drove in three runs to key the rally.

The Streak offense was a well-oiled machine as it collected a season-high 26 hits.

Gerig led the way, going 4-5 with a double and three runs-batted-in. Beck, Wyse, and Robinson all had three hits, while Allison, Desi Newman, Paige Peterson, and Madison Kohler each had two.

Robinson was the winning pitcher, giving up only one run on four hits while striking out two and walking none.

“What a start to the game,” said Joe Frank, AHS head coach.

“Scoring 11 runs in the first inning was not what I had envisioned coming into the contest, but we certainly hit the ball well. The credit goes to the team for going to the plate and getting the job done.

“Our focus was very good, and we certainly took control of the game right away. Payton pitched very well and our defense was solid behind her.

“We know that Fairview will provide a stiff test in the finals, but we are looking forward to the challenges that they present to us.”