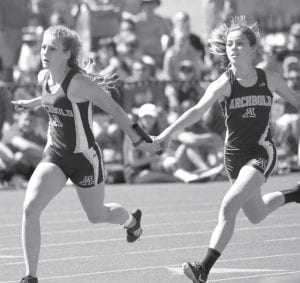 Top left: Emily Roth gets the handoff from Shylo Richardson in the girls 4×100-meter race. The Streaks finished fourth in the event. Top right: Julia Lambert jumps off the block in the girls 4×400, where AHS finished fourth. Bottom left: Sam Petersen takes the handoff from Noah Blankenship in the boys 4×400. Archbold finished third. Bottom right: The Pettisville girls 4×800 team of Alexa Leppelmeier, Nichole Foor, Morgan Leppelmeier, and Elizabeth Sauder have a group prayer after the race. They finished second.– photos by Mary Huber and Beth Foor

Archbold and Pettisville track athletes stepped on the medals podium eight times after finishing in the top eight of their events at the Division III state track and field meet, Friday and Saturday, June 2-3, at Columbus.

Finishing as runners-up were the Pettisville girls 4×800-meter relay team, the Archbold girls 4×200 team, Pettisville’s Alexa Leppelmeier in the 1600-meter run, and Archbold’s Dakota Stamm in the 400.

“I couldn’t be prouder of the kids in the way they performed at the state level of competition,” said Dina Gladieux, AHS head coach.

“To come back to Archbold with two state runners-up, one third place, two fourth places and one eighth place is simply amazing.” 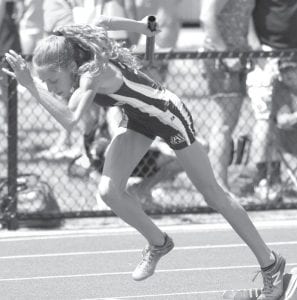 The Pettisville team of Elizabeth Sauder, Nichole Foor, Morgan Leppelmeier, and Alexa Leppelmeier started off the meet by cutting 15 seconds off the school-record time they set just last week at the regional meet.

The Birds finished at state in a school-record time of 9 minutes, 12.89 seconds, destroying the record of 9:27.78 set at regionals.

I was ecstatic, really, at districts running a 9:34.52, setting both a district record and a school record,” said Tom Wagner, PHS head coach.

“Then at regionals we ran a 9:27.78, setting a regional and school record.

“To believe we could knock another 15 seconds off our time and run a 9:12.89 is unbelievable!

“I must admit, I was worried about Nichole getting out fast enough. Well, not to worry.

“She ran the fast time of the day, a 2:15 split, which does stand to reason. She’s never had anyone in front of her before, until state. No one to run after. 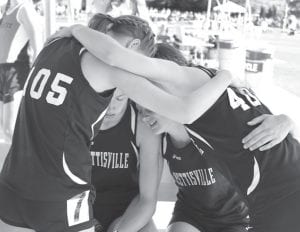 “All of the girls ran a superb race. I am so very proud of them!”

“We’re really happy,” said A. Leppelmeier. “We were so close to winning, but second place is pretty good. I’m happy with that. The time was awesome.

“Obviously we were going for the win, but we’re not disappointed because we know we tried our hardest; they (St. Thomas Aquinas) tried their hardest,” said Sauder.

“We had competition here and it was fun, and we’re happy to even be here. The time that we got– we can’t complain.”

“I knew I had to go out faster,” said Foor. “I don’t know what time I got, but whatever it was, I was just running for them.

“It just gets so thrilling. Just to work with them, just to know, no matter what, we’re proud of each other and to run our hardest for (each other.)” 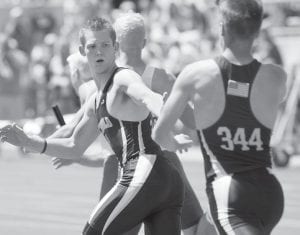 “We were talking last night, and we were saying if we ran our hardest that we were going to be happy with whatever we got,” said M. Leppelmeier. “We ran all that we could, and I’m really happy.”

“And I wouldn’t want to do it with any other team,” said Sauder. “This is like my alltime favorite team and I will never forget. I just love them so much.”

“I’m just so happy we were able to come here and all run our best. Even though we didn’t get a first-place finish, we know that we tried our best and we did the best we could.

“We all are very pleased with what we’ve accomplished here.

A. Leppelmeier, a senior who finished tenth in her three previous trips to state, finished second in her final 1600, running the race in 5:04.24, setting a school record.

She set the record last week at regionals, running a 5:04.4 race.

“I got on the outside in the beginning, and the outside helped me push to not get caught up in the inside and to come up with a kick,” said the PHS senior.

“My coaches always taught me to have a kick at the end, and that really helped me in this race.

“To get on the podium feels really good.”

“Alexa ran a splendid race in the 1600,” said Wagner. “She held her position well, not getting boxed in, staying to the outside. Then she made her move at the end.

“What a smart race Alexa ran. Her experience paid off.”

Stamm, a sophomore, improved on last year’s fourthplace finish by taking the runner up spot on the podium.

“Whenever I get ready for a race I always kind of feel like crying, so then I always promise myself that when I’m done I can cry,” said Stamm.

“And I never usually cry, but this time I felt like I had to because I really didn’t expect to run that time.

“So I improved by a lot more than I was expecting, and I was so happy about that. I couldn’t believe it when I saw my time.”

“It was a great team race, getting a good qualify time yesterday,” said Fisher. “We knew we could come up and compete top three. Our goal was to go top three, and that’s what we did.

As a senior, Fisher was “happy to go out that way. Happy to go out top three on the podium. To do it with those guys and run one last race here really means a lot, to do that for Archbold and for those guys.”

“Any finish was good for us,” said Lambert. “We were coming in (with the) tenth (fastest time), so just to get on the podium we were so excited about.

“We were struggling with handoffs before we came, but we worked and we dropped so much time just coming down here.

“We’re just proud of our finish and being able to step up on that podium and get fourth.”

“We were just really excited to run this because this is our last race with these exact people all together,” said Riley.

“I was really excited for it and nervous. We didn’t get our best time, but I’m just so happy because we made the podium, and we did it together.

“It’s just the best, and knowing it’s the last time together, I was so happy.”

“It’s tough to realize that this is our last race ever running together as a 4×4,” said Lambert, a senior. “We’re lucky enough, we’ve gone down here every year, so it’s kind of sad that this is the end to it.”

“This team, I count it as my family,” said Roth, a senior.

“So just being able to come down here and run my last time with my family, it’s the greatest feeling in the world to know that these girls– we all have each other’s backs all the time. I’m so happy we’ve had all this experience together.”

“It was a little rough,” said Fisher. “I wanted to go top five, but (an) eighth place finish, I couldn’t be more happy. Third-time podium finisher in that race, so I was just happy I didn’t lose.”

He finished eighth as a sophomore and third as a junior.

Archbold’s Lexa Richardson ran in the preliminaries of the girls 100-meter hurdles but failed to advance.

Archbold was fourth with 26, and Pettisville was 10th with 16.