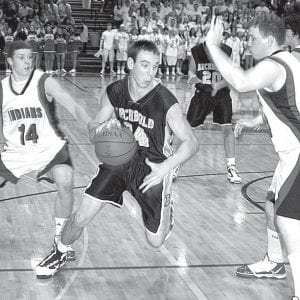 Archbold’s Luke Kammeyer slices through a pair of Indians in their non-league contest, Saturday, Dec. 5. A sophomore, Kammeyer scored 12 points in the Blue Streaks’ 53-49 victory.– photo by Scott Schultz

A low-scoring but fastpaced first half had Wauseon supporting a three-point lead after Landon Schaffner buried a three-pointer at the buzzer, but Archbold owned the second half on its way to a 53-49 non-league boys basketball victory, Saturday, Dec. 5, at WHS.

The old-fashioned rivalry was the season opener for both teams.

The duo of Telly Fricke and Garrett Morton broke the game open for AHS in the second half.

“This was a hard-fought win. I think all coaches are very skeptical going in (to the first game) because you just don’t know what to expect,” said Doug Krauss, AHS head coach.

“This is always a great game, with this crowd and atmosphere. I thought we came out and did some nice things defensively.”

“Archbold is deep and they play hard,” said Chad Burt, WHS head coach. “They will win a lot of games this year.

“I thought both teams played hard, but Archbold just came out on the good end.”

Luke Kammeyer, a 6-foot- 6 sophomore the Archbold student section calls “Kamo,” opened the third period with a put-back, followed by a Morton deuce.

Sam Miller added one at the charity stripe. Morton hit a jumper and converted a Fricke steal into two more.

After a Wauseon timeout, a deuce by Tyler Hinkle knotted the score.

Fricke converted a steal into two and nailed a jumper on Archbold’s next possession. Wauseon answered with a Hinkle jumper. A drive into the lane by Colt Humbert knotted the score at 30 with time ticking down.

Fricke nailed a three at the buzzer, giving Archbold a 33-30 lead to start the final quarter.

Fricke tallied seven points in the quarter and led a trio of Archbold players in double figures, with 15. Morton and Kammeyer chipped in 12 each.

Schaffner, who paced Wauseon with 17, led off the fourth by hitting the front end of a one-and-one. Drew Smith answered for AHS, hitting a conventional three.

The two squads exchanged baskets throughout the final period with Fricke, Morton and Kammeyer combining to score Archbold’s next 13 points.

“Telly (Fricke) hit some huge shots for Archbold,” said Burt. “We were looking to contain him off the dribble, but he was able to step out and hit some big threes.

“I thought we did a good job in the half court (on Morton). But then he got the ball in transition, and with his size and skill we didn’t have an answer for him.”

With 2:11 to play and a nine-point lead, the Streaks spread the floor. The Indians answered by fouling.

Archbold shot a dismal 10-22 from the foul line, but Kammeyer closed the game hitting 4-6 in the closing minutes to seal the win.

“Give credit to Kammeyer,” said Burt. “We thought we could put the young sophomore on the line and he would miss a few, but he stepped up and made them.

“With his length inside, defensively he had to have six or eight blocked shots and altered some shots. He was really a force.

“Unfortunately for us, his offensive game has gotten a lot better.”

“We did foul too much,” said Krauss. “We have to eliminate some of that, but our kids’ effort was great.

“We have to continue to go inside. We have a guy (Kammeyer) that could score a little bit. We finally went to him in the second half and he converted for us.

Kammeyer “is a work in progress. We wanted the ball in there, and he didn’t do a bad job at the foul line, compared to some of the things we have been doing.

“The foul line has been our bugaboo. I don’t have an answer right now; obviously we have to improve at the foul line.”