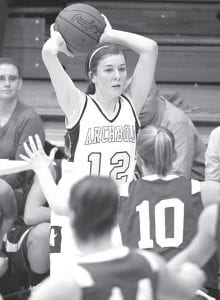 “Today we got a nice team win against a quality team in Stryker,” said Brian Ziegler, AHS head coach.

“I liked our pressure, both in the full court and in the half court. We had Alicia Drewes and Chelsea Goebel in double figures, and had good balance with the others.

“We did a decent job at the foul line. Getting out to the big lead was huge, while we did a nice job in the press to spark our offense.”

The Streaks led 16-7 after one period and outscored the Panthers 10-7 in the second for the 12-point lead at the half.

Both teams scored 30 points in the second half.

Drewes led all scorers with 21 points. Goebel was also in double figures, with 10.

The Panthers committed 18 turnovers to Archbold’s 11.