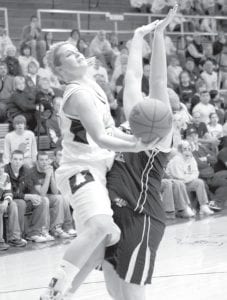 Leading 44-42 over Patrick Henry with 1:03 left in regulation, the Archbold girls basketball team knew a Division III sectional championship was far from a lock.

After Brian Ziegler, AHS head coach, called a time-out with 50 seconds remaining, Alicia Drewes hit a jump shot to widen the gap to 46-42.

PH (10-12) committed its 17th turnover on the inbounds pass, and sent Abbey Graber to the free-throw line after fouling the AHS senior with 23.8 seconds left.

Graber sank both free throws to give the Streaks a 48-42 cushion.

Patrick Henry’s Tiffany Ehlers sank a three-point shot to close the gap to three, but with no time-outs left all PH could do was watch the clock wind down to zero as Archbold won the Div. III sectional title 48-45, Saturday, Feb. 27 at Defiance High School.

The game stayed tight throughout. The score was tied at 8 after the first period, and a steal and basket by Ehlers just before the buzzer gave PH a 22-19 halftime lead.

PH’s Kelsey Tietje hit two foul shots at the 6:41 mark in the third.

Archbold’s first points after halftime came on a Devin Newman basket with 3:35 left, its first points in seven minutes, but the Streaks were down by only three, 24-21.

Archbold tied the score at 27 with two foul shots by Alyssa Schaub. Graber and Drewes scored four quick points after two steals on the next two plays, and the Streaks led 31-27. After Ehlers drove to the basket for PH, Hailey Galvan scored the period’s last points, giving AHS a 33-29 lead.

Tietje scored two quick buckets to tie the score at 33 with 6:32 left. After a tie at 35, Archbold took the lead for good when Schaub completed a fast break after Ehlers lost control of the ball.

Archbold’s largest lead was 44-38 with 2:10 left. Baskets by Patriots Krystin Reiser and Ashley Christman closed the gap to 44-42, but it wasn’t enough as the Streaks upped their record to 20-2.

“We had a poor night shooting,” said Brian Ziegler, AHS head coach. “Give credit to PH. They played very well defensively, not allowing us to get in any kind of flow. Our girls kept battling, though.

“I thought we did a nice job pressing and forcing the tempo. Schauby did a nice job on Ehlers in the second half while also playing big at the offensive end.

“Abbey made some clutch free throws down the stretch, going 5-6 at the line.

“I thought our depth was again a big factor. This time of year it comes down to execution. PH executed well in the first half and we did much better in the second half.”

Schaub led Archbold with 11 points. Graber was also in double figures, with 10.

Archbold jumped out to a 9-0 lead and never looked back, defeating Liberty Center 56-20 in a sectional semifi nal, Wednesday, Feb. 24 at DHS.

Twelve Streaks scored. Schaub was the only player in double figures, with 10.

Liberty Center bowed out with a 5-16 record.

“This was a nice way to start the tournament,” said Ziegler. “Getting off to a 9-0 start was huge. Defensively I thought we did a great job forcing LC out of their offensive motion, and also forced many turnovers.

“Offensively, we were very unselfish. I thought we moved the ball very well against the LC zone defense. Abbey (Graber) made some nice passes to Hailey (Galvan). Devin (Newman) did a nice job inside, also.

“Stacy Wyse had some nice passes as well and did a nice job playing the passing lanes. The bench did a great job sustaining the lead.”