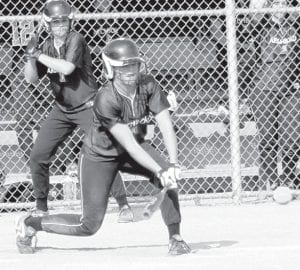 Stacy Wyse, shown batting against Evergreen, April 22, hit a two-run homer in Archbold’s 4-2 NWOAL victory over Patrick Henry, Thursday, April 29. The Streaks are atop the league with a 6-0 record.–photo by Mary Huber

The Archbold softball team handed Patrick Henry its second loss of the season and first in the Northwest Ohio Athletic League, Thursday, April 29.

The Streaks broke open a scoreless game in the third inning by scoring six runs, followed by nine more in the fourth and two in the fifth to whitewash the Panthers 17- 0 in five innings.

AHS piled up 18 hits in the last three innings and was led by Morgan Cody, who was 3-4 with two doubles, a home run, and five runs batted in.

Courtney Day and Abbey Graber were each 3-4 while Alyssa Schaub doubled and homered.

Sarah Wyse and Lex Campos combined on the mound to throw a two-hitter while striking out 10 and walking none.

The Generals were too much for the Streaks as Archbold was shut out for only the second time this season.

AHS collected five hits but stranded nine runners on base. Day continued her hot hitting by going 2-3, but no other Streak collected more than one hit.

Sarah Wyse pitched the first four innings while Campos pitched the last two. The Generals had only seven hits, but walks, errors, and two home runs were the difference.

The loss snapped a 10- game win streak for Archbold while Anthony Wayne improved to 15-1.

The Streaks continue to seek their fifth straight league title after picking up a huge NWOAL win over previously undefeated PH.

The Patriots jumped out to a 1-0 lead thanks to two walks and two wild pitches. Archbold took the lead in the fourth by virtue of a two-run homer by Stacy Wyse.

Campos was on board with a single before the homer. PH tied the game in the sixth with two walks and two singles but could not gain the lead.

With the game tied at 2 headed into the seventh, the Streaks rallied for two runs. With one out, Jenna Nofziger singled and advanced to second when Schaub was hit by a pitch.

After a wild pitch advanced both runners, Day came through with a clutch single to drive in two runs.

Campos, who pitched the last five innings, set the Patriots down in the bottom of the seventh to secure the Blue Streak victory.

The Patriots were limited to four hits by Campos and Sarah Wyse.

“We played a solid game and were able to pull together and got a clutch hit in the seventh inning from Courtney to beat a very good PH team,” said Joe Frank, AHS head coach.

“This was a big confidence builder after losing badly on Tuesday to a very good Anthony Wayne team.

“We control our own fate in the league race, and that is a positive as well. We are hoping to finish the regular season strong and build some momentum as we head into tourney play.”