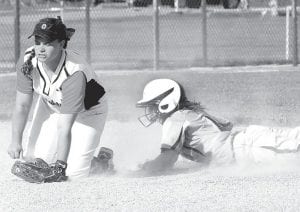 Archbold faced a mountain sized challenge when the Streaks battled Otsego in the Division III district softball semifinals, Wednesday, May 17.

Otsego (14-9) won its previous two tournament games by a combined score of 26-0.

The Streaks countered with senior hurler Alyssa Ziegler, who stymied the Otsego bats.

Ziegler pitched a complete game, giving up four hits and one run with 14 strikeouts and one walk, on Archbold’s way to a 2-1 victory.

The Streaks got on the board in the top of the third inning when Peyton Dickman slapped a single down the third-base line that scored Madison Roth.

The Knights tied the game in the sixth inning.

Otsego had a chance to score the go-ahead run, but Dickman tagged the runner out at the plate.

Archbold scored the goahead run in the top of the seventh as a Kaitlyn Beck single scored Gabby Nafziger in a close play at the plate.

After the umpires conferred, it was determined that Nafziger scored under the tag of the Otsego catcher.

Ziegler slammed the door shut on the Black Knight batters in the final inning to secure the win.

“That was a phenomenal game of fast pitch softball,” said Andrea Thiel, AHS head coach. “That’s the way it’s supposed to be played.

Nafziger, Dickman and Beck had two singles each to account for Archbold’s six hits.

With the win Archbold advanced to the district finals against Eastwood, who defeated Ottawa Hills 10-0 in their district semifinal.