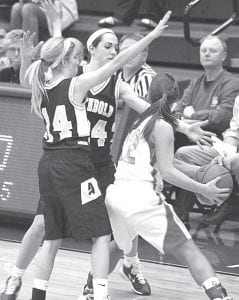 Archbold took control in the fourth quarter of its Division III district semifinal, outscoring Lima Central Catholic 14-7 to earn a 40- 30 victory, Thursday, March 1, and a berth in the district final.

“The fourth quarter has been ours most of the year, just because we move so many girls in and out,” said Brian Ziegler, AHS head coach.

“We try to stay fresh and by the fourth quarter we’re hoping to wear ‘em out.

“I thought they (LCC) were getting tired. They switched to the man defense. I thought we took advantage of some things offensively that we thought we could get, and we executed, (and) got a couple of back door layups.

“That was a big key as far as our perimeter defense. We knew coming in (LCC) is a team that likes to shoot a lot of three-pointers. We didn’t want them to get set.

“I thought our perimeter defense really forced them to work hard and maybe do some things they weren’t used to doing. We played hard and didn’t let them get into any kind of offensive flow.”

The game remained close throughout the first three quarters as the T-Birds led 9-8 after one, but AHS took a 16-11 advantage into the locker room.

“I couldn’t have been any happier after three quarters,” said Bill Taflinger, LCC head coach.

“There we are, in a threepoint game. We couldn’t have drawn it up any better.

“The thing you can’t take away, though, is even though we’re down three, we’re probably getting a little tired.

“Their constant pressure just wears on you. I know I had some girls playing a lot of minutes.”

Jesse Fidler followed with a bucket after a steal, and then hit one of two free throws for a 31-23 advantage.

Lexie Kingsbery hit a deuce for the T-Birds with 5:53 left.

Taylor Coressel broke open for three consecutive back door shots, hitting two and getting fouled on the third. She hit one of two free throws and all of a sudden, Archbold opened up a 36-25 lead with 3:56 remaining.

“When we switched to man-to-man, we knew they love that backdoor lob play,” said Taflinger. “When we had seen it they were 5-5 on it when they run it. They were 3-3 tonight.”

The T-Birds closed the difference to eight, 38-30, but a pair of Abby Short free throws gave AHS the 40-30 victory.

“The pressure and constant harassing, and every time you turn around they’re double teaming you… they’re rotating so well on defense. You’ve got to make quick decisions and make that next pass. It just wears on you. They’re good at it.

Wyse and LCC’s Kelly Ahman shared scoring honors, with 10 each.

The victory advanced the Streaks to the district finals, where they were to play Coldwater. The Cavaliers defeated Delta 62-47 in their district semifinal on Thursday night.