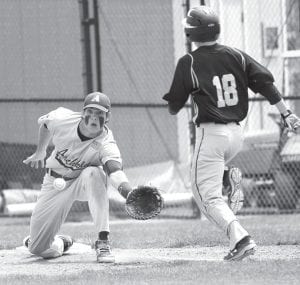 Archbold’s Seth Mayer stretches to catch the ball at first base as Fairview’s Austin Meyer is thrown out in their district semifinal, Thursday, May 19. The Streaks advanced to the district final with a 5-4 victory.– photo by Mary Huber

The large contingent of fans at the Division III district semifinal game, Thursday, May 19, at Defiance College couldn’t have asked for a more exciting finish.

With the tying and winning runs on base for Fairview in the seventh inning, senior Ben Bucklew came on in relief to get the final two outs and send the Streaks into the district championship game 5-4.

Archbold came roaring out of the gate in the first inning. Toby Walker, Bucklew, Ian Radabaugh, and Seth Mayer all had hits, along with a sacrifice fly by Lathon Babcock, to give Archbold a surprising 4-0 lead.

The Apaches fired right back in the second, putting up four runs of their own to tie the score.

“I’ve never seen a team hit Lathon that hard,” said Selgo. “Fairview is a very good hitting team, and sometimes you just have to give the other team credit.”

Sophomore Trevor Rupp (4-0), who recorded the win, came on in relief with two outs in the second inning and shut Fairview down for the next four.

“What a job, for a sophomore to come into a pressure packed game like that and give us that kind of performance,” said Selgo.

Fairview starter Kody King was also settling in and held the Streaks scoreless the next four innings.

With Bucklew on second base in the bottom of the sixth, Radabaugh ripped a drive to left field that looked like it would drive in the goahead run.

But Alex Jackson, Fairview’s left fielder, made a spectacular running catch to record the second out.

That set the stage for Babcock’s heroics as he ripped a single up the middle to drive in the winning run.

Fairview (19-9) was not going to go away quietly in the seventh inning as the first two batters reached base safely.

That’s when Bucklew came to the mound.

He got the next two batters to hit ground balls for outs– the second a shot that shortstop Derek Walker fielded and fired a strike to freshman catcher Travis Ziegler for the tag out at home to keep the tying run from scoring.

Bucklew then got the strikeout on a 3-2 pitch to end the game.

The win gave AHS a 20-8 record, the third time in the last four years the Streaks have reached the 20-win milestone.