Streaks Battle Back to Defeat Huron In Semi 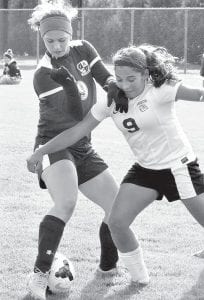 Down 1-0 almost halfway through the second half, Archbold (18-0, ranked #4) dug deep and scored a pair of goals to get a 2-1 come-from-behind win over Huron (13-4-2) in the Division III district girls soccer semifinals, Wednesday, Oct. 25, at Genoa.

The Streaks looked to be in control of the first half but were unable to score a goal.

Huron scored the first goal of the match with 8:03 left in the first half, a 1-0 lead the Tigers took into the half.

Archbold had scored 20 straight goals without giving up any before the Huron score.

The Streaks came out in the second half and controlled the pace of the game, looking to score the equalizer.

With 22:22 to play, Emie Peterson took a pass from Brooke Kohler and scored the tying goal.

With 9:39 remaining, Chloe Nofziger took a shot from 25 yards out and blasted it past the Tiger goalkeeper for the 2-1 lead.

The Archbold defense stepped up and thwarted any attempt by Huron to send the game into extra time.