Streaks Are In The Playoffs! 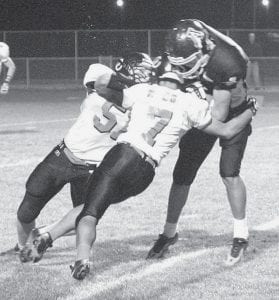 David Rupp gets attacked by a pair of Tigers after making a catch. The Streaks had 302 passing yards in their 35-13 NWOAL victory over Liberty Center, Friday, Oct. 26.- photo by Scott Schultz

A win was needed for a chance at the football playoffs.

A win was needed after suffering back-to-back losses.

A win was needed for Archbold seniors to bid farewell in their final home game of the season.

The answer: a 35-13 thumping of the visiting Liberty Center Tigers, Friday, Oct. 26.

The Streaks set the tone early and walked away with their seventh win of the season against three losses. They close the Northwest Ohio Athletic League play with a 6-2 record.

Wauseon and Patrick Henry share the league title with 7-1 marks after the Indians upset the Patriots 35-28 on Friday night.

The Tigers closed their regular season with a 7-3 record and a 5-3 NWOAL mark.

The Blue and Gold defense set the tone early, shutting down the Tigers on their opening possession. The Archbold offense, which was shut down the last two weeks, kicked off the scoring on a Gene Goering 6-yard run.

Goering scored on 5 and 2 yard runs. He also hit Jack Downey for a 9-yard touchdown for a 28-0 lead midway through the third quarter.

“I thought our offense executed really well,” said John Downey, AHS head coach. “When Gene (Goering) is healthy, we are about 50/50 between the run and the pass, and that is what we do best.

“Liberty was only rushing three guys tonight, so we should be able to block them with five guys; when they did blitz, we were able to pick them up.”

Archbold’s defense, which gave up over 300 yards rushing just last week to Wauseon, faced LC’s run game and declawed the Tigers, holding them to only 155 yards on the ground.

Under Rex Lingruen, head coach, LC finally crossed the goal line at the 4:20 mark of the third quarter when Sean Sexton ran it in from 5 yards out.

From the start the Tigers wanted to establish their run offense, but with the Archbold defense stiffening, LC played catch-up and was forced to go to the air.

The Tigers’ air assault did not fare any better than their ground attack, passing for just 45 yards.

On the other side of the ball Goering threw for 302 yards, connecting on 21 of 28 for two touchdowns and one interception. Once again the senior signal caller passed the wealth around, hitting six receivers.

“When Gene has time he will find the open receiver,” said the AHS head coach.

Senior Jack Downey also crossed the goal line one more time, on a 9-yard toss. He closed the game with two catches for 22 yards. Colton Martinez, also a senior, caught one pass for 11 yards.

“Tim (Downey, AHS assistant coach) came up with a real good defensive game plan,” said John Downey. “It was a look that Liberty hadn’t seen before, and I think that caused them some confusion early on.

“We were able to get some stops and turnovers right away. They could just never get in sync.”

“We played terrible,” said Lingruen. “We played flat the first half and it carried over into the second half.

“We didn’t deserve to win this football game. Our offense has to be better, and our offenses didn’t do it. That is my fault, because I coach the offense.

“Archbold outplayed us, and they deserve to win.”