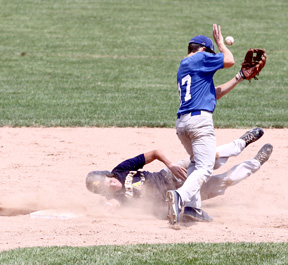 Holding an 11-7 lead entering the bottom of the seventh inning, all that stood between Archbold and the Junior Acme State Championship game was three outs.

With one out and the bases loaded, relief pitcher Derek Walker walked his first batter, and the Generals closed the gap to 11-8.

Walker settled down and struck out the next batter for the inning’s second out.

AW’s Ryan Meyers stepped up to the plate, popped up a foul ball which was caught by the Streaks, and Archbold advanced to the state finals for the first time in history with an 11-8 victory, Sunday, July 21, at Bryan.

It is the fourth time Archbold has advanced to the state tournament.

If Archbold loses the 6 pm game, the two teams will play again at 8:30, winner takes all.

Both teams scored single runs in the sixth for the 11-7 score going into the seventh.

Anthony Wayne had 14 hits to Archbold’s nine in the contest. Both teams had three errors.